146% of Muscovites Are for Free Elections 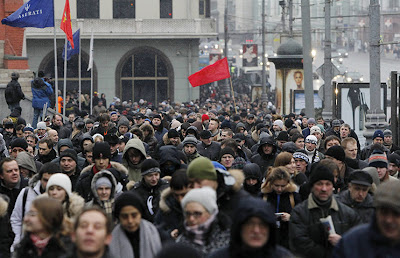 Said a sign carried at the big protest in Moscow on December 10. Another:

In the short term, these protests will not accomplish anything. Vladimir Putin is not giving up power, and I suspect a majority of Russians prefer him to revolutionary chaos. But perhaps there was the beginning of something here, a "political awakening of Russia’s urban middle class."

Among the things the protesters chanted was, "We exist." Is that not the core sentiment of democracy, the demand by people to be recognized and counted?
Posted by John at 12:24 PM