Andrew Sullivan flags another study showing that most religious people think there are many possible paths to god: 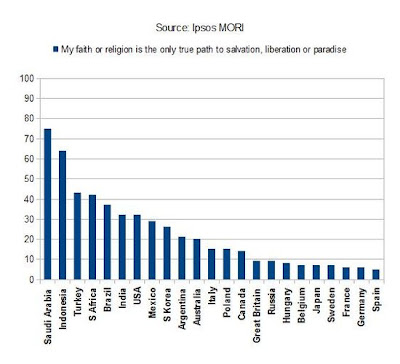 Which I think is great. But there are limits to the open-mindedness of religious people. Another study in the news this week confirms that religious people think atheists are criminally immoral. The abstract is below. The idea seems to be that as long as you think god is watching, you can be a good person, no matter how you imagine god, but without some notion of a watchful god you are all to likely to become a serial killer. But the Buddhists are right about this one: the root of morality is not the fear of god, but compassion.

Recent polls indicate that atheists are among the least liked people in areas with religious majorities (i.e., in most of the world). The sociofunctional approach to prejudice, combined with a cultural evolutionary theory of religion’s effects on cooperation, suggest that anti-atheist prejudice is particularly motivated by distrust. Consistent with this theoretical framework, a broad sample of American adults revealed that distrust characterized anti-atheist prejudice but not anti-gay prejudice (Study 1). In subsequent studies, distrust of atheists generalized even to participants from more liberal, secular populations. A description of a criminally untrustworthy individual was seen as comparably representative of atheists and rapists but not representative of Christians, Muslims, Jewish people, feminists, or homosexuals (Studies 2-4). In addition, results were consistent with the hypothesis that the relationship between belief in God and atheist distrust was fully mediated by the belief that people behave better if they feel that God is watching them (Study 4). In implicit measures, participants strongly associated atheists with distrust, and belief in God was more strongly associated with implicit distrust of atheists than with implicit dislike of atheists (Study 5). Finally, atheists were systematically socially excluded only in high-trust domains; belief in God, but not authoritarianism, predicted this discriminatory decision-making against atheists in high trust domains (Study 6). These 6 studies are the first to systematically explore the social psychological underpinnings of anti-atheist prejudice, and converge to indicate the centrality of distrust in this phenomenon.