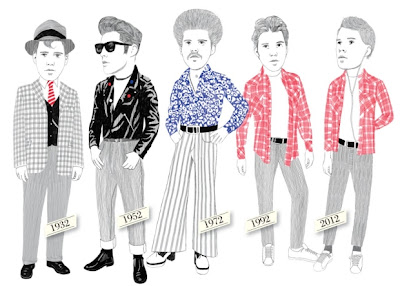 I have noticed that the clothes I bought 20 years ago can still be worn without embarrassment, and that the rapid change in musical styles over the period 1900 to 1980 has also slowed down. So I was amused to find this Vanity Fair essay by Kurt Andersen on the lack of change in the culture, both popular and elite, over the 1992-2012 period:

Rewind any other 20-year chunk of 20th-century time. There’s no chance you would mistake a photograph or movie of Americans or an American city from 1972—giant sideburns, collars, and bell-bottoms, leisure suits and cigarettes—with images from 1992. Time-travel back another 20 years, before rock ’n’ roll and the Pill and Vietnam, when both sexes wore hats and cars were big and bulbous with late-moderne fenders and fins—again, unmistakably different, 1952 from 1972. You can keep doing it and see that the characteristic surfaces and sounds of each historical moment are absolutely distinct from those of 20 years earlier or later: the clothes, the hair, the cars, the advertising—all of it. It’s even true of the 19th century: practically no respectable American man wore a beard before the 1850s, for instance, but beards were almost obligatory in the 1870s, and then disappeared again by 1900. The modern sensibility has been defined by brief stylistic shelf lives, our minds trained to register the recent past as old-fashioned.

Go deeper and you see that just 20 years also made all the difference in serious cultural output. New York’s amazing new buildings of the 1930s (the Chrysler, the Empire State) look nothing like the amazing new buildings of the 1910s (Grand Central, Woolworth) or of the 1950s (the Seagram, U.N. headquarters). Anyone can instantly identify a 50s movie (On the Waterfront, The Bridge on the River Kwai) versus one from 20 years before (Grand Hotel, It Happened One Night) or 20 years after (Klute, A Clockwork Orange), or tell the difference between hit songs from 1992 (Sir Mix-a-Lot) and 1972 (Neil Young) and 1952 (Patti Page) and 1932 (Duke Ellington). . . .

Now try to spot the big, obvious, defining differences between 2012 and 1992. Movies and literature and music have never changed less over a 20-year period. Lady Gaga has replaced Madonna, Adele has replaced Mariah Carey—both distinctions without a real difference—and Jay-Z and Wilco are still Jay-Z and Wilco. Except for certain details (no Google searches, no e-mail, no cell phones), ambitious fiction from 20 years ago (Doug Coupland’s Generation X, Neal Stephenson’s Snow Crash, Martin Amis’s Time’s Arrow) is in no way dated.

I don't mind, since the collective madness of changing fashions has always bugged me. But it is very interesting.
Posted by John at 9:24 AM

If the author thinks that the pop-culture technological innovations of the last twenty years can be summed up as Google searches, e-mail, and cell phones, then that's his problem right there. In 1992 there was no texting or tweating, no You Tube, no MMORPGs, and movie CGI had a long way to go before we'd get to LOTR and 300. It's true that in personal adornment the main change has been limited to the mainstreaming of multipiercings, male piercing, and tatoos, and the ongoing slow demise of the necktie--not hugely innovative. I wonder if what the author is really remarking on (and, I suspect, complaining of) is the absence of heroic, rules-breaking, sexy figures like Brando, Elvis, Mick Jagger, Germaine Greer, and so on--as well as heroic, rules-breaking, sexy innovations in things like architecture, etc. It's true we live in an ungrandiose age, which culture critics must find a terrible wasteland. Folks like Camille Paglia must be frustrated that the kids would rather play Assassin's Creed than break the few remaining moral taboos (cannibalism, anyone?). I wonder if at bottom the pace of nerdy technological change has simply outpaced anything artistically, morally, or behaviorally innovative that humans can do, at least until we start putting USB ports in our brains and watching what comes out.

Yes, we could be so saturated with technological change that we don't have the energy for new fashions. Our fads have been things like rickrolling, chain emails, Facebook, and chatspeak. And texting while driving, which we may hope is a short-lived one.