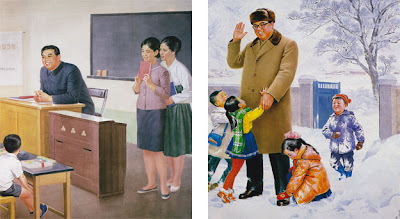 From a fascinating slide show at Foreign Policy. Above, Kim Il Sung visiting a school, looking more like an indulgent parent than a disciplinarian. The Kims have often been depicted as portly to emphasize their genial nature; foreign despots are often shown as skinny and mean. FP:

North Korean propaganda often associates the country's leaders with snow, a symbol of purity, and with carefree children, symbols of innocent spontaneity. 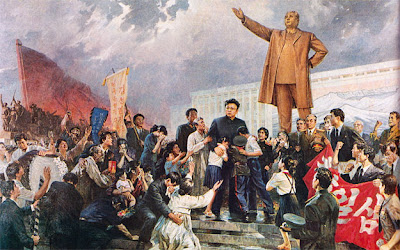 Kim Jong Il comforts a grieving nation after the death of his father Kim Il Sung in 1994; the gathering storm represents foreign threats to the nation. 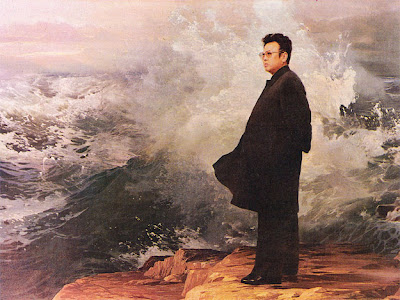 The Dear Leader stands guard as the waves of a hostile world crash ineffectually against the rocks.

Kim was shown in North Korean media ceaselessly inspecting the nation's defenses, partly to excuse him from responsibility for the nation's economic disasters.
Posted by John at 7:08 PM