Novgorod: the Archaeology of Medieval Russia 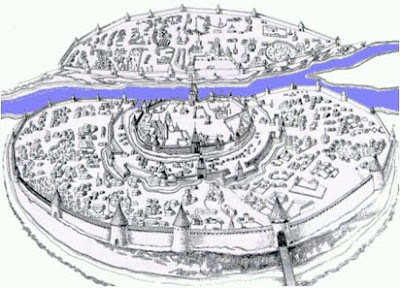 From time to time I stumble across a mention of the wonderful archaeology of medieval Novgorod. I find hints of fabulous things, like letters written on birch bark, intact wooden and leather tools, lovely jewelry, and so on. But I have never seen a book about the archaeology of Novgorod, or even a decent article summarizing the work done there and the main finds. Today in the library I was flipping through one of those 50 Great Archaeological Discoveries sorts of books (for which I confess a weakness), and I saw that it had a three-page section on Novgorod. This actually told me more than I had ever known about the history of the discoveries and the overall shape of the excavations, and I decided to spend some time searching the web to see if I could write a long post on this amazing site. Most of what I have found online consists of picture sets posted by people who have visited Novgorod and toured the museum, camera in hand. Here is a good one. But I also found some more scholarly sites, and I ordered a copy of a 20-year-old book on the city, which I will report on when it gets here from England.

What I discovered is that serious excavations began at Novgorod in 1929 under the direction of Artemy Artsikhovsky, well funded by the Soviet government as an example of the new socialist science focused on the ordinary people of the past. After a long hiatus caused by World War II, the work began again on a large scale in 1951, taking advantage of the extensive destruction in the city to reach areas that had been covered by buildings. (It's an ill wind that blows no man some good.) In one form or another the work has continued down to the present day. The excavators discovered that the old city was buried under up to 8 meters (25 feet) of damp clay that preserved perishable objects made of wood, leather, bone, and even cloth. The wooden walls of many houses were preserved to a height of a few feet (half a meter), along with the wooden streets (below), bits of fencing, and other features that allowed precise mapping of the whole community. On the other hand the great depth of the deposits and the vast amount of rare material to be conserved means that the work has gone slowly, and only about 3 % of the medieval city has been explored. 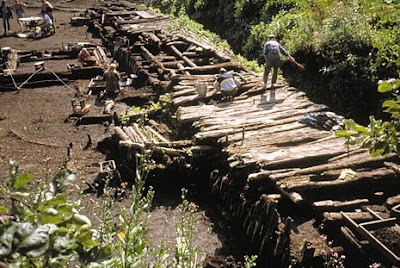 Chronicles begin to mention Novgorod starting around AD 860. However, the archaeological record of the city begins in the tenth century, around AD 950, and most of the material found dates to after AD 1100. (Because there is so much preserved wood, the archaeologists have worked out a very reliable series of tree-ring dates.) One interpretation of the discrepancy is that the place was at first mainly a fortress, confined to the citadel hill, accompanied by an open-air market, and the lower-lying areas along the river that became the heart of the city were not settled until a century later. (Another "new town" of the high middle ages.) 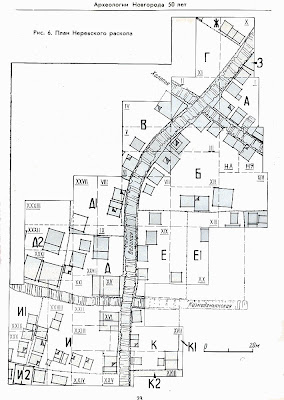 The first districts explored contained sizable houses on neat rectangular lots, each lot measuring about 50 by 100 feet (15 x 30 m). The houses were wooden, and so many beams and joists have survived that we know some of the houses were three stories tall. Each house had its own privy, which is where many of the best artifact finds were found. 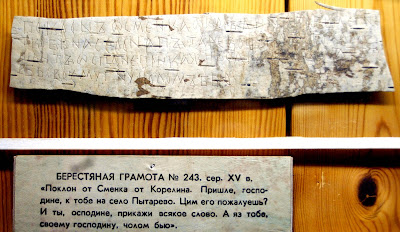 The most important thing to come out of the dig is the famous birch bark letters, of which about 900 have now been found. One list I found of the contents of these documents says they include


tax documents, school lessons, wills, spells, I.O.U.'s, marriage proposals, prayers, political commentary, records of legal conflicts, and orders for icons, as well as the names of people and nearby villages

A typical one is shown above, saying, "I am bending my back, Smenka and Koremna. I came here to the village of Petrrevo. How would you receive me? What will you say to my master through me?" Summary of a few more:


In one letter from the first half of the 12th century, a Novgorod woman curses a female acquaintance for borrowing money and not giving it back.

Another written by a man named Semyon contains household instructions for his daughter-in-law concerning malt and meat; she is also instructed to pay a debt to a man named Ignat amounting to one rouble.

A letter from a woman named Gostjata to her male relative Vasiliy complains bitterly about unfair treatment from her husband; she pleads with Vasiliy to come and sort the matter out.

A man called Mikita is straight to the point in his written marriage proposal to his beloved Anna: “marry me—I want you and you want me, and the witness to that is Ignat Moiseev.”

The bark was boiled to soften it, and then it was written on with a sharp stylus, pressing the letters into the paper. The paper mostly comes, as you would expect, from privies. These were not valuable, carefully preserved documents, but bits of daily business, read and then discarded. 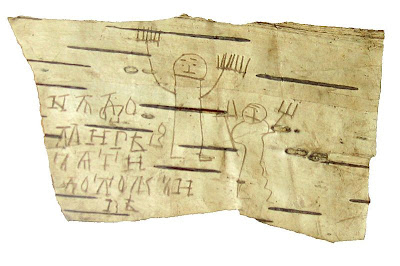 Here is one of the most famous, a doodle by a young boy named Osmin who got half way through writing out the alphabet before he gave up and started drawing. Several documents in his hand survive, including one with a drawing in which a knight labeled "Osmin" runs another warrior through with his lance and another with a picture of a bear and the words "I am a wild beast." Not a very eager student, this Osmin, and his unamused parents sent their wild beast's work straight to the pile of paper used in the privy.

The barely visible scratches on this sheet are the Russian alphabet. Most of the documents are written in the local dialect of old Russian, with a few in Finnish, Norse, or Old Church Slavonic (the liturgical language of the Slavic churches). Their authors are quite ordinary people: small merchants, the bailiffs of estates, a blacksmith, a cobbler, a turner of wooden bowls. Styluses for writing are among the most common iron artifacts found in the digs. This has led a few over-generalizing scholars to proclaim that literacy was much more common in the medieval world than we had been led to believe. Certainly it was widespread in 12th-century Novgorod, where every substantial shopkeeper made use of written documents. But one of the distinguishing things about medieval society was its strong local traditions. Novgorod was a trading city with ties across Europe -- a fair amount of pottery from Iraq or Syria has turned up in the digs -- and we know that long-distance trade promoted literacy in other cities. There was also the cheap, locally-made birchbark paper, which probably also encouraged writing. Plus, literacy was more common in towns than in the countryside all across Europe. So what we have learned about literacy in Novgorod is not necessarily applicable to Leeds or Rouen, and it certainly does not apply to peasants.

And now, some of the other treasures:

A wooden instrument called a rebec, played with a bow, from the 12th century. 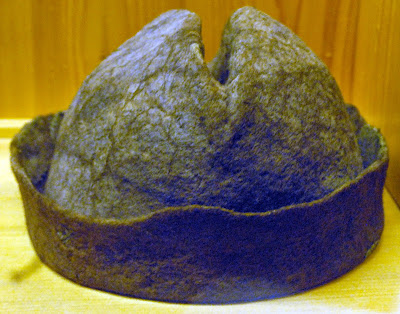 Bits of metal ornamentation in the Viking style. 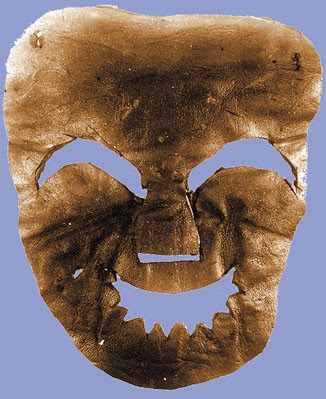 Several of these leather masks were found in the waste from a cobbler's shop. Were they just pranks? Or evidence of an undocumented festival in which journeymen and apprentices put on such masks as they tore up the town, Halloween style? 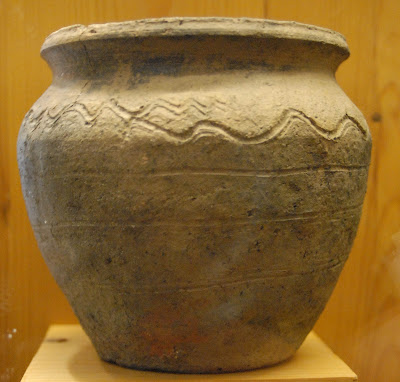 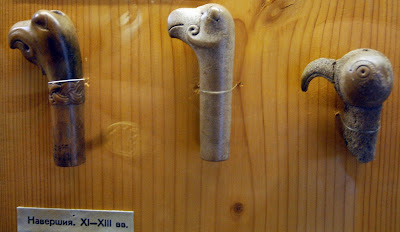 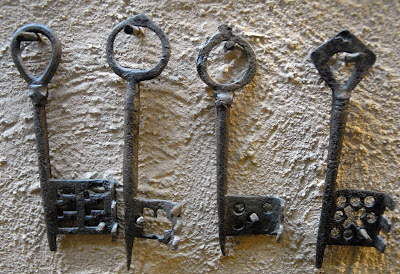 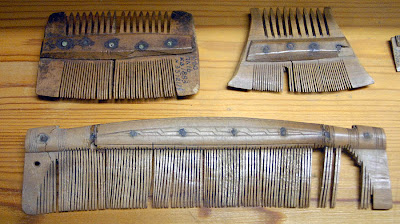 Wooden combs. The double-sided, coarse and fine-toothed comb was the standard design in the medieval world and in colonial America as well, and I had seen hundreds and found a few myself before I discovered, a few years ago, that the fine side was for picking nits. So when your kids get head lice, take solace from knowing that you are participating in one of the most ancient rituals of our civilization.