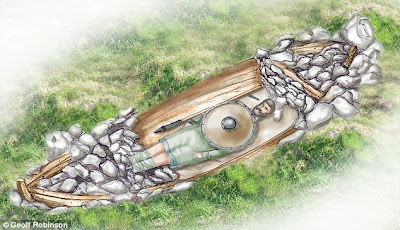 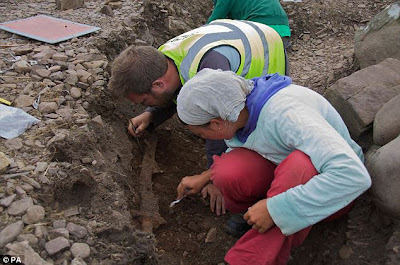 A Viking boat burial was excavated earlier this year on the Ardnamurchan peninsula on the west coast of Scotland, the first found in the British Isles:

The timbers of the ship found on the Ardnamurchan peninsula – the mainland's most westerly point – rotted into the soil centuries ago, like most of the bones of the man whose coffin it became. However the outline of the classic Viking boat, with its pointed prow and stern, remained. Its form is pressed into the soil and its lines traced by hundreds of rivets, some still attached to scraps of wood. An expert on Viking boats, Colleen Batey from the University of Glasgow, dates it to the 10th century.

At just 5m long and 1.5m wide, it would have been a perilously small vessel for crossing the stormy seas between Scandinavia, Scotland and Ireland. But the possessions buried with him suggest the Viking was a considerable traveller. They include a whetstone from Norway, a bronze ringpin from Ireland, his sword with beautifully decorated hilt, a spear and a shield which survive only as metal fittings, and pottery. He also had a knife, an axe, and a bronze object thought to be part of a drinking horn. Dozens of iron fragments, still being analysed, were also found in the boat.

The Ardnamurchan peninsula is a lonely spot with spectacular views, and it was a favored spot for burials from neolithic times. 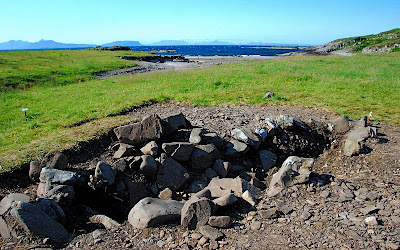