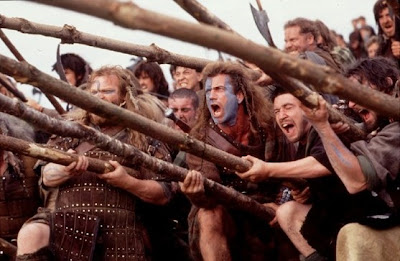 As do lots of other Americans. Monday, after sinking the compromise that had been frantically worked out in the Senate to keep payroll taxes from going up on January 1, they huddled in a basement conference room for two hours. And not to plan strategy:

Turns out they were talking Monday night about their favorite scenes from “Braveheart.” About 10 House Republicans went to the microphones to share their memories of the Mel Gibson film. . . .

One member spoke about the apocryphal scene in which the 13th-century Scottish rebel William Wallace ordered his troops to moon the English. Another member recounted the scene in which Wallace commanded the rebels to hold their positions before raising their spears against the charging English cavalry.

Many Americans claim Celtic descent, and we love to side with oppressed people standing up for their freedom. I enjoyed Braveheart myself, despite its many historical howlers. It presents a mythic version of Scottish history that smooths out all the complications but does keep to the basic truth: Edward I of England was trying to impose his authority as Scotland's overlord, and William Wallace was trying to stop him. It also, I think, gets the character of Edward I right: a greedy thug of a king whose constant grasping for more money and more power led him into war with all of his neighbors and political revolt from his own barons. Its main errors are in presenting the Scots as a nation long before they were any such thing -- William Wallace was a lowland knight with French ancestors, who spoke French and English, but not a word of Gaelic -- and in gay stereotyping. I don't have any problem with presenting the future Edward II as gay, but he was not a physical wimp, and the actual "best friend" of his youth was Piers Gaveston, said by some to be the finest knight in Europe.

But as historical myths go, the William Wallace myth is neither remarkably inaccurate nor particularly offensive, and it also has the nobility of age, since it existed in the form Mel Gibson followed by about 1450, 150 years after Wallace's death. Great fodder for movies.

Not, though, a particularly good model for legislators in a democracy. The point of the myth, and the movie, is that the Scots were a different people from the English, and that they faced a choice between ruling themselves and falling under foreign domination. Wallace is portrayed as a hero for dying in the defense of Scottish liberty. I doubt that account would have made any sense to Wallace, but that's the myth.

The problem with the current Republican party is that they see themselves, not as the legislature of a nation that votes for Democrats half the time, but as the beleaguered defenders of a sacred cause. They care not a bit about the fate of the nation as a whole; their supporters are, so far as they are concerned, the only "real" Americans. To people like me they offer nothing but a mass mooning. They are especially unconcerned about the Congress as an institution, and despite their loudly proclaimed reverence for the Constitution they are happy to destroy their own branch of government in pursuit of complete power. Compromise with liberals makes no more sense to them than compromise between spearmen and charging knights.

These men somehow missed the lesson that democracy is always, first and foremost, about compromise. To govern in a democracy means finding a formula that most of the very disparate citizenry can agree on. It does not mean just holding the line or dying in the attempt. Quite by coincidence I read a Tom Friedman column this morning in which he says "the issue that will determine the fate of all the Arab awakenings" is,

Can the Arab world develop pluralistic, consensual politics, with regular rotations in power, where people can live as citizens and not feel that their tribe, sect or party has to rule or die?

The Republican Party, alas, has chosen extremism, believing that if they do not rule, their America will die. They are foolish and wrong. And did they not notice that William Wallace's men were slaughtered, and Wallace himself captured and beheaded?
Posted by John at 7:26 AM