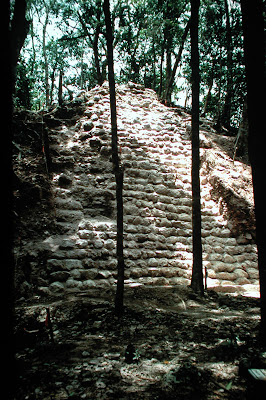 Blue Creek is a medium-sized Maya city in northwest Belize where excavations have been ongoing since 1992; Past Horizons has a nice summary of the work, carried out by the Maya Research Program, and the site's history. 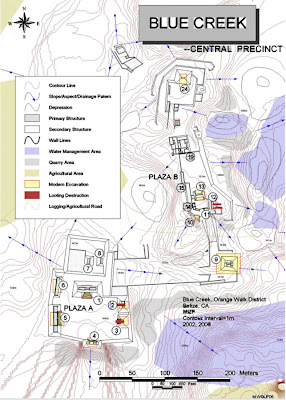 The story is the typical one for a Maya site: through the Early Classic period (AD 200-600) the city grew ever larger, its public buildings ever more impressive, and more and more of the surrounding countryside was brought under intensive cultivation. 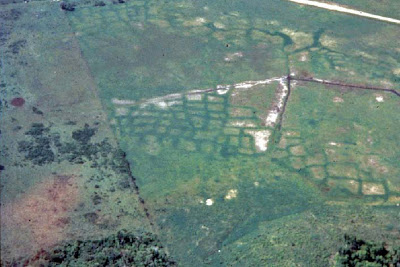 The field network around the city has been extensively studied. These are the remains of drainage ditches that turned what is now marshy pasture into productive gardens. Note that even with the great population growth of recent times, there are still hundreds of thousands of acres of land that were farmed intensely by the Maya but are now jungle or pasture. 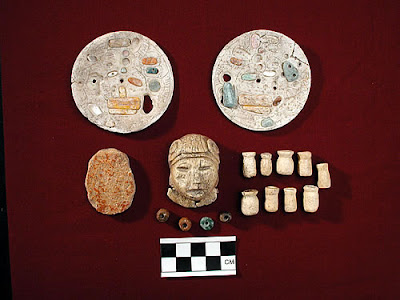 Blue Creek seems conspicuously wealthy for a site of its size, especially in the amount of "jade" (jadeite and nephrite) found at the site. The excavators attribute this to its place in the trade networks that that tied together the Maya world, Mexico, and the Caribbean. 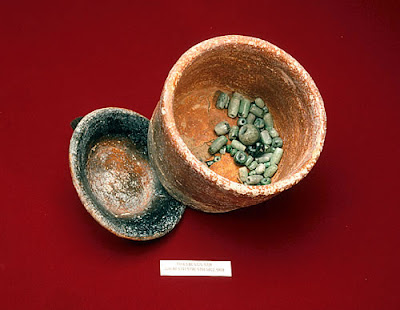 Blue Creek remained stable through the Late Classic period, a bystander to the great wars that drew in most of the Maya cities. And then the thing happened, at Blue Creek as across most of the Maya world, that ought to seem stranger to us than it does:

By the Terminal Classic (800-1100AD), Blue Creek’s political structure had profoundly changed. Construction activities within the site core and adjacent residential areas, such as Kin Tan [the compounds of the elite], came to an abrupt halt. Ultimately, the Terminal Classic is marked by the abandonment and termination of sacred structures, both within the site core and within its most elite residences. In the central precinct, for example, large quantities of broken ceramics and other portable goods were deposited on the front of a shrine associated with Structure 3, representing the final event within the site core. The central precinct was subsequently abandoned.

The flat scholarly prose papers over a disaster of unique proportions: the self-destruction of one of the world's most sophisticated civilizations, the collapse of a vibrant economy, and the disappearance of at least a million people. The collapse had two parts. It began with a sudden disaster that overtook most of the cities in the Maya heartland, including the biggest. Trash was piled in abandoned temples and palaces, building and the carving of glyphs ceased. Life did not end, though; people continued to live in the towns, at Blue Creek for 300 years. A few towns endured as centers of high culture for a century or two. But the population did not rebound, the carefully tended fields gradually shrank, the jungles expanded, and slowly more and more of the towns were completely abandoned. By AD 1100 the Maya heartland was much like it would be in AD 1800, a region of villages where people practiced subsistence agriculture. Only in the Yucatan, which had been peripheral to the Maya world of the Classic Period, did Maya civilization last down to European contact.
What was it like to live through such a collapse? What did people think was happening to them? Were the villages happy to be spared the forced labor used to build the pyramids, and conscription into the armies? Or were they distraught and fearful? I find this fascinating and frightening, and it makes me wonder about the relationship of ordinary people to the cultures or civilizations of which they are said to be part.
Posted by John at 6:39 AM