The Witches' Cottage of Pendle Hill 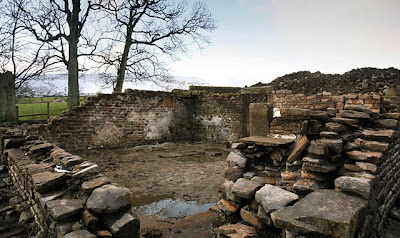 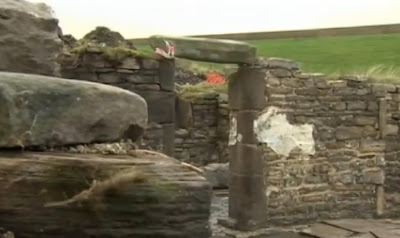 The Pendle Witches, famous in witch lore, are in the news this week because a partially intact seventeenth-century cottage was found under a pile of rubble in the village of Barley near Pendle Hill. A cat had been entombed in one of the brick walls, and its intact skeleton -- not "mummy" as some news accounts have it -- was found when the ruin was investigated by archaeologists. This has led to all sorts of mad speculation that this house was the home of some of the witches, perhaps even the mysterious Malkin Tower where the accused witches met shortly before their trial. The cat is indeed related to witchcraft but it would have put in the wall as a protective measure, and any superstitious 17th-century person might have done this; archaeologists find these all the time. But let me tell the story. 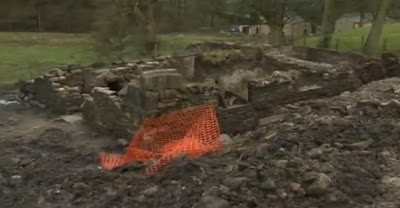 In 1612 ten women and two men from villages near Pendle Hill in Lancashire were put on trial, accused by their neighbors of murdering ten people by witchcraft. Ten were convicted, one died in prison, and one was acquitted. The guilty were hanged in a makeshift gallows on the moors. This was part of one of the biggest "witch scares" in British history, the trial of 17 witches at the 1612 Lancaster Assizes. The clerk, knowing he had a story in his hands that people would pay to hear, published the record of the court proceedings as The Wonderfull Discoverie of Witches in the Countie of Lancaster. Thanks to this record and a few other sources, we know a lot about the case. The background to the scare involves King James I's moves against Catholicism, which was still strong in Lancashire (the first complaint against the Pendle Witches was made to an official who was searching for Catholics), and his personal interest in witchcraft, which may have led some local officials to seek his favor by looking for witches to prosecute. 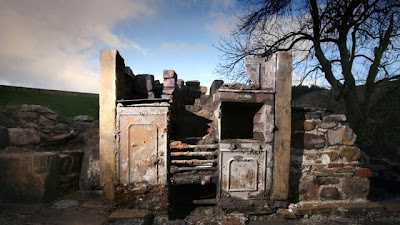 Six of the Pendle Witches came from two families,


each headed by a female in her eighties at the time of the trials: Elizabeth Southerns (aka Demdike), her daughter Elizabeth Device, and her grandchildren James and Alizon Device; Anne Whittle (aka Chattox), and her daughter Anne Redferne. . . . Many of the allegations resulted from accusations that members of the Demdike and Chattox families made against each other.

The chief witnesses against Elizabeth Device were actually her own children, whom she cursed in front of the court with such vehemence that she was removed from the courtroom by the bailiff. She was the classic witch, with a deformed face, one eye lower than the other, and a nasty streak, given to publicly cursing people who would not give her what she thought was her due. Sixteenth-century English skeptic Reginald Scott described the lives of these people in The Discoverie of Witchcraft:


These go from house to house and from door to door for a pot of milk, yeast, drink, pottage, or some such relief, without which they could hardly live. . . . It falleth out many times that neither their necesities nor their expectation is answered or served in those places where they beg or borrow, but rather their lewdness (i.e. rudeness) is by their neighbors reproved. And further, in tract of time the witch waxeth odious and tedious to her neighbors, and they again are despised of her, so as sometimes she curseth one, and sometimes another, and that from the master of the house, his wife, children, cattle, etc., to the little pig that lieth in the stye. Thus in process of time they have all displeased her, and she hath wished evil luck unto them all, perhaps with curses and imprecations made in form. Doubtless at length some of her neighbors die or fall sick, or some of their children are visited with diseases that vex them strangley, as apoplexies, epilepsies, convulsions, hot fevers, worms, etc., which by ignorant parents are supposed to be the vengeance of witches. . . . The witch on the other side expecting her neighbors' mischances, and seeing things sometimes come to pass according to her wishes, curses, and incantations being called before a Justice, by due examination of the circumstances is driven to see her imprecations and desires, and her neighbours harms and losses to concur, and as it were, to take effect; and so confesseth that she, as a goddess, hath brought such things to pass.

This behavior is why some accounts of the trial (even the quite good wikipedia entry) say that the accused witches practiced "extortion." They were poor people --Elizabeth Southerns was 80 years old and blind -- and in village society poor people often depend on the charity of their neighbors, which up to a point is an obligation on the better off. Conflicts arose when a poor beggar was seen as demanding too much or acting too obnoxiously toward those who supported her. Calling down divine wrath on those who would not give alms is a very ancient practice, but in the European Renaissance it came to be seen increasingly as witchcraft, and it slowly died out. 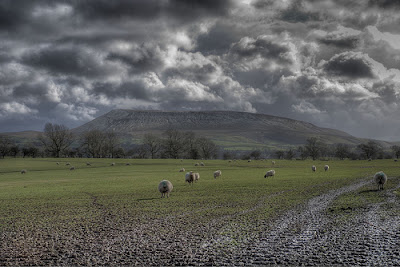 Much of the testimony at the trial focused on a meeting said to have taken place at the Device family home on Good Friday, 1612. The house was known as Malkin Tower; in the local dialect "malkin" could mean either a cat or a doll made from rags or leaves, both of which might be associated with witchcraft. The house was "in the Forrest of Pendle," and various witnesses described hearing sounds near it like the shrieking of cats or the screaming of children. (That's Pendle Hill above.) When the meeting was held, Elizabeth Southerns and Alice Chattox had already been imprisoned, and a meeting of their friends and relations immediately aroused the suspicion of the authorities. According to court testimony, the lamb they had for dinner had been stolen by James Device. The Devices and their friends insisted that this was innocent get-together, but the courts (and Elizabeth Device's children) said it was to plot the murder those who had jailed the old women. Some modern historians think it was a secret Catholic service. All those who were proved to be at the meeting were eventually executed. 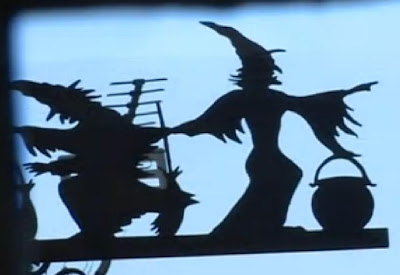 Today there is a witch industry around Pendle Hill, with shops and tours and commemorative teacups. The tour guides are going to be all over this witch house story, and now it will never die. But Malkin Tower was in the forest, not the town, and its mysteries remain undiscovered.
Posted by John at 7:50 AM

hi there, great post! I really like the moody cloudy photo of Pendle hill and would love to have it as the background of my twitter page, would that be okay? is it yours?
thanks
Caroline

No, it's not mine, but it came with a Creative Commons license, so anybody can use it.