More Data on Rising Mortality in the US 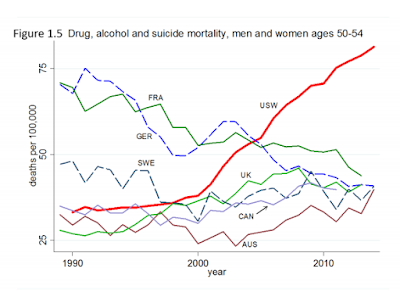 Teams of statisticians have poured over the 2015 Case-Deaton paper showing that mortality is rising for non-Hispanic whites in the US, and the basic finding has been confirmed again and again. This is from a 2017 paper by the same scholars, updating and expanding the original. This figure compares the death rate of US whites from drugs, alcohol, and suicide, age 50-54, to that of people the same age in other wealthy nations. You can see that since 1990 the US has gone from about average to far and away in the lead. This international comparison is hard on certain explanations that have been advanced on both the right and the left. Leftists blame inequality, but inequality is just as big an issue in Australia and the UK as it is in the US, and in fact it is rising everywhere in the world. Some explanations favored on the right, such as declining church attendance and generous disability benefits, ought to be bigger factors in Europe than here. I personally think both inequality and declining religiosity may be contributing, but there is something unique about white Americans that makes the problem worse for them. 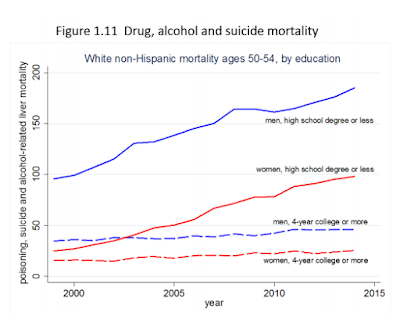 In the US, the rise in "deaths of despair" is concentrated almost entirely among white Americans who never went to college. In 1999, the raw death rate for whites age 50-54 with only a high school degree was 30 percent lower than than of blacks in the same age group, but by 2015 it was 30 percent higher. Incidentally these graphs focus on the 50-54 age group because they have seen the biggest rise, but the numbers hold true to some extant for all age groups from 25 to 64.

Still confused about support for Donald Trump? Look at those figures again. Trump got elected by promising to fight for ordinary white Americans. As long as he can keep posing as their champion, he will keep winning, because millions of white Americans believe that they desperately need a champion. They scan the political scene and see that Democrats seem more interested in helping asylum seekers at the border than dying white people; that they want white people whose death rate is rising to pay reparations to black people whose death rate is falling; that they would rather have cheap phones than fight for American factory jobs. The Republican mainstream has been crippled because desperate white folks aren't interested in free trade or lectures about hard work, they want help, now; meanwhile many better off suburbanites who used to vote Republican can't stomach Trump's racism and lowbrow vulgarity and so are likely to vote Democrat, leaving Trump's supporters firmly in control of the party.

The issue of 2020, the only issue, is who can do the most to help ordinary folks who feel like they are losing out, and are dying from their misery over it.
Posted by John at 11:58 AM

So now that the oldest segments of the white Gen X population are middle aged, they're busy overdosing, drinking themselves to death, and putting guns in their mouths? Can't say I'm surprised, given the nihilism that has always defined their generation.

Let's humor the idea that these burnouts somehow constitute "ordinary folks who feel they are losing out", despite their having inherited all the wealth and privelege of their Boomer parents, enjoying comfortable middle class lifestyles, owning their own homes, and having been the last generation to enjoy the availability of truly affordable college degrees and truly stable employment and careers, etc.

What, precisely, are you suggesting should be done for these people? What are the Democrats supposed to be promising them that they aren't already? How, exactly, are they losing out any more than countless other millions who have it far, far worse than they do?

The MTV generation has gotten old, fat, divorced, and unhappy, so now they're voting Trump because he's supposed to fight for them? What?!? How? By trying to waste billions on an insane border wall? By putting children in cages to punish their parents for attempting to LEGALLY seek asylum? By making empty, impossible promises to revive the coal industry? By raising their taxes in order to give tax cuts to the ultra wealthy?

What the hell is Trump ostensibly giving these people that benefits them in any way whatsoever? What in the world has he done that has helped any of them at all? Because from where I'm sitting, Trump has either done absolutely nothing for them, or has made their lives actively worse by slashing funding to programs that are meant to help people like them, and by preventing reforms that would directly benefit them.

They're angry because they feel like the government needs to do more to help them, and then they vote for the Republican platform of cutting government aid programs? What?!? They're voting against their own self interest!

What sane person would do that? If these people truly want help from the government, then why the hell are they voting for the political party whose political agenda for their entire lifetimes has been to constantly decrease the amount of help the government gives to people?

You know what's "unique about white Americans that makes the problem worse for them"? The selfish, misanthropic Boomer generation and their spoiled, whiny, disaffected kids who gave up on life in the '80s!

The richest, most privileged white generations in a century or more, and they constantly moan about how hard their lives all, when millions of their juniors and racial minorities struggling against poverty and social injustice would trade places with them in a heartbeat!

How come you don't hear about rampant alcoholism, drug abuse, and suicide among the Millenials, or among non-whites? While everyone else is busy busting their asses to make ends meet while simultaneously decrying the worst injustices of our society that affect the most oppressed and underprivileged segments of the population, the Gen Xers are busy shredding their livers and blowing their brains out, because their lifetimes of disgruntled ennui and "sticking it to The Man" have finally caught up to them, and they've realized they're somehow even more pathetic than their abusive, self-absorbed parents.

And so they vote for the rich, womanizing psychopath who is openly in bed with the goddamn Ku Klux Klan, and everyone and their Centrist dog bends over backwards to paint their willingness to throw in with the hatemongers as simply "the pressures of legitimate economic concerns" driving them away from the people who want to give them things like universal healthcare and tax and labor reforms, and instead into the arms of jingoistic racists who start trade wars with China for no reason.

What would be interesting would be to see someone gather a large number of the individual stories behind these suicides. Also an extremely granular study of the phenomenon indicating the trends across the map. (I'm curious about the latter as indicating, for example, if environmental chemicals are a contributing factor, e. g., do agricultural pesticides promote depression in humans?)

Until we get studies like these and they're publicly available, I feel we're stuck in a lot of guesswork (like my pesticide question, I admit, though I don't think the idea is ridiculous).