Brough Castle in Cumbria, England has a long and fascinating history. 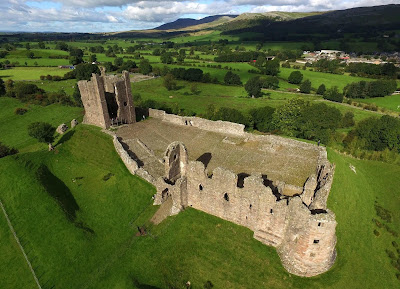 It was built on the site of the Roman fort of Verterae, a post on the road that connected the two main Roman bases in the north, at York and Carlisle. The Roman name of that road is sadly not known. The fort was placed at the western end of Stainmore Pass, where a route across the Pennines opens out into the Vale of Eden. 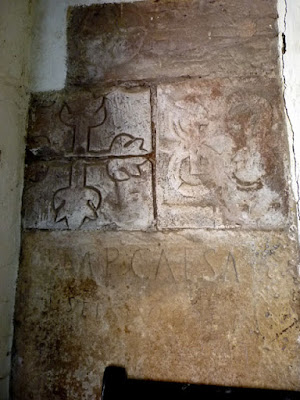 The fort has been investigated several times by archaeologists going back to 1866. It was probably built by the Roman governor Gnaeus Julius Agricola in AD 79-80, during his campaign to conquer the north of Britain. (Agricola was the father-in-law of the historian Tacitus, who wrote a short book about him.) The fort measured about 330 by 360 feet (100x110 m), and there was a settlement or vicus outside the walls; excavations there found evidence of wattle and daub buildings. The place was occupied well after the last Roman troops were withdrawn from Britain in 410 AD, perhaps as late as 500. The photograph shows stones from the fort that were built into the parish church of the nearby town of Church Brough. 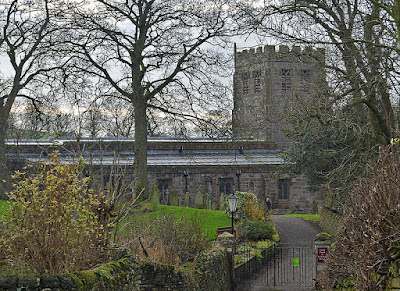 After the last post-Roman squatters moved on the place seems to have been abandoned for 600 years. In 1092 William Rufus, son of the Conqueror, built a motte and bailey castle here, taking advantage of the surviving Roman earthworks for much of the outer defense. (This was true of many medieval castles.) Church Brough was founded nearby at about the same time. This was a planned settlement, one of many the Normans built across the north during their campaigns to subjugate the region. Parts of the standing church in the town go back to this period. 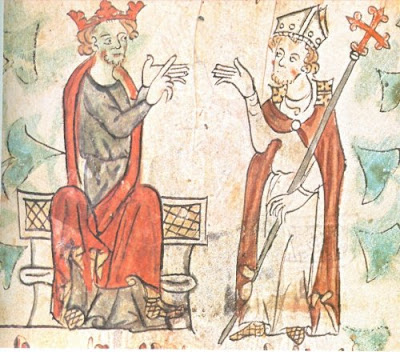 In 1173, during the great rebellion against Henry II (that's him squabbling with Archbishop Thomas Becket above), William the Lion of Scotland invaded the Vale of Eden and attacked several fortified places with varying degrees of success. Wikipedia:


Brough, guarded by six knights, put up a strong resistance, but William took the outer defences and then besieged the keep, threatening to execute the garrison if the castle was not surrendered. The keep was set on fire, forcing the surrender of the garrison, including one knight who, according to the chronicler Jordan Fantosme, fought on first with spears and then wooden stakes, until finally overwhelmed. William then destroyed the remaining defences of the castle using Flemish mercenary troops.

However Henry put down his son's rebellion, after which he sent Ranulf de Glanville, Chief Justiciar of England, into the north with a large force, and William withdrew. The Scots tried again the next year, but Glanville again came north, this time attacking William's forces near Alnwick Castle and routing them. That war pretty much sealed English control of everything south of Hadrian's Wall. 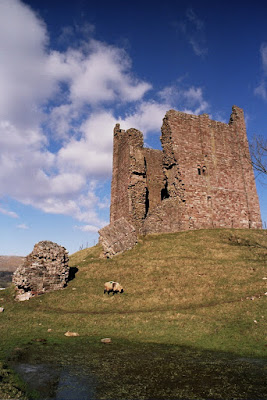 Henry had the keep of Brough rebuilt in stone, and although this is disputed that seems to be the keep that still stands on the site. In 1203 King John granted the castle to Robert de Vieuxpont, who built the first stone curtain walls. 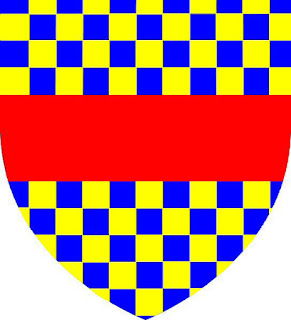 During the Baron's War of 1264-1267 John de Vieuxpont was killed fighting on the Barons' side. His property fell to his two under age daughters. King Henry III granted their wardship (which included the right to pick their husbands) to Roger Clifford, one of his own followers. Clifford selected himself as the husband of the younger daughter and thereby acquired control of half the property, which included Brough. The Cliffords (their coat of arms is above) became one of the most powerful families in the north and held Brough into modern times. 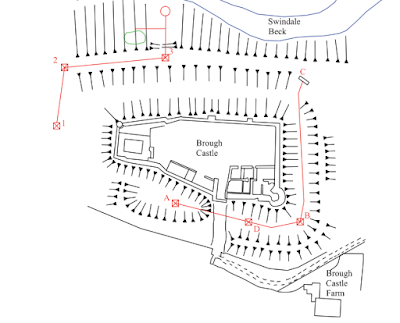 In 1314 Robert Clifford died fighting the Scots at the Battle of Bannockburn, Robert Bruce's great victory over Edward II. That victory opened the north of England to Scottish raiders, and Church Brough was attacked and damaged in 1314 and 1319. Another Roger Clifford, I think Robert's son, was badly wounded in the civil war of 1322, pierced by an arrow at the Battle of Boroughbridge. Future Cliffords were just as belligerent; two fell fighting for the Lancastrians during the Wars of the Roses.

The Cliffords added more to the castle over the course of the 14th century, including a new stone hall. The bailey, or castle courtyard, was paved with cobbles at this time. The pavement has of course been repaired over they years but some of the original stones are still there. 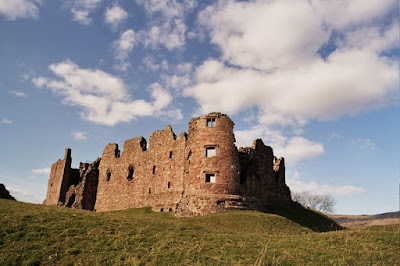 In the 17th century the castle fell into the hands of Lady Anne Clifford, who kept her head while her male relatives all died fighting in the Civil War or were forced into exile. She rebuilt several Clifford castles, including Brough, where work began in 1659. She put the square windows into Clifford's Tower and installed 24 fireplaces. 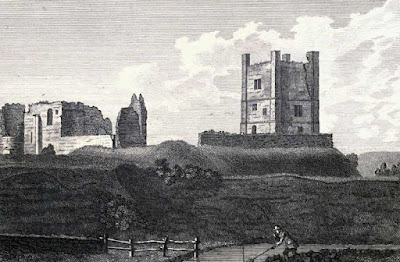 Anne renamed the old keep the Roman Tower, because she believed it had been built by the Romans. (The same misdating happened to many medieval monuments in the Renaissance, including the 12th-century Baptistery in Florence.) Anne died in 1676 before restoration at Brough was finished, and the project was abandoned by her descendants. By the eighteenth century it had become a picturesque ruin.
Posted by John at 8:08 PM