The Burning of Bahlam Jol 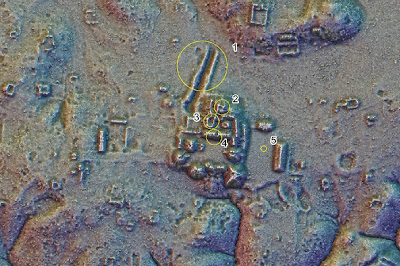 Dr. David Wahl is a geographer who has been trying to understand the environmental changes that accompanied the rise and fall of Maya civilization in the lowlands of central America. His method has been to study the sediments left in lakes, which vary according to how much soil is eroding from nearby fields and other factors. Somebody told him that a small lake by the Guatemalan site of  Witzna might be a good research target.


It was. In lakes, he said, the rate of sediment accumulation varies greatly, so that one centimeter (about four-tenths of an inch) of a drilled lake bed core could represent the passage of anywhere from a decade to several centuries. But in the lake near Witzna, sediment had been deposited so rapidly that a centimeter represented less than a decade, perhaps close to one year. That meant it was an extraordinarily detailed record that could be tied closely to dates and records.

In the cores he drilled, he found a layer of charcoal three centimeters thick (about 1.2 inches), with chunks of charcoal almost a half inch on a side. Another author on the paper, Lysanna Anderson, a specialist in evidence of ancient fires, studied the layer. They concluded that it indicated a massive fire and had been deposited very quickly — all at once it seemed, although some might have been from runoff a season after the burning.

In addition, other chemical indications of human activity dropped off rapidly right after the event, he said, indicating that the human population itself had suddenly decreased. The fire had happened, they judged, between 690 and 700.

So it seems that the city was abandoned after a great fire. 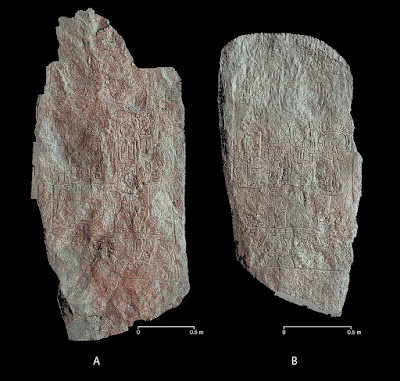 Then another stroke of luck: archaeologist Francisco Estrada-Belli, excavating in the ruins of Witzna, found a stela (above) that gave the Maya name of the site: Bahlam Jol.

Then another archaeologist, Alexandre Tokovinine, searched a database of Maya inscriptions and found this item, under the year 697: Bahlam Jol burned for the second time.

It's a remarkable series of connections, and shows how the sheer quantity of data that archaeologists have built up about the classic Maya can lead to surprising advances.

Another interesting detail about the study is that the city of Bahlam Jol seems to have been destroyed in warfare. The classic Maya fought wars all the time, but they generally seems to have been kept within limits, like those between Greek city states in the 5th century BC, or European kingdoms in the 1700s. Armies marched out, fought, the winners claimed certain spoils (including victims for sacrifice), but most of the losers went home and life went on. Not until the crisis that marked the collapse of classic civilization in this area were many cities outright destroyed like Bahlam Jol was. But it is not the only such case known, so it seems that sometimes people just got really mad and the rules limiting violence went out the window.
Posted by John at 7:28 AM