Franz Schmidt and the Profession of Executioner 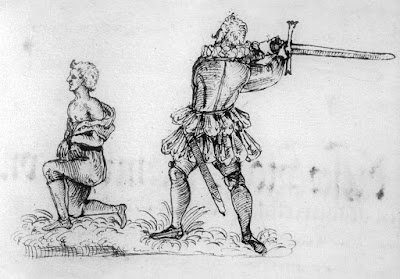 Franz Schmidt (1555-1634) was a professional executioner who left a voluminous diary that makes him quite likely the best known executioner in European history. By his account he executed 394 people, besides numerous floggings, maimings, applications of torture, and so on. The picture above was drawn in the margin of a court roll and is the only known portrait of Schmidt; it depicts him executing Hans Fröschel on May 18, 1591.

Like most executioners he inherited his profession from his father; the elder Schmidt was the executioner of Bamberg. The son told the story that his father had been a woodsman when the Margrave of Brandenburg-Kulmbach chose him from a crowd and forced him to perform a beheading, whereupon he had no choice but to take up the trade. In 1578 the younger Schmidt became the executioner of Nuremberg, where he remained for the rest of his life.

What interests me about this story is people's ambivalence toward executioners. On the one hand most people believed that public executions were vital for maintaining order, and royal or city officials stage managed executions to display their awesome power. There was a lot of pressure on the executioner to do the job quickly and cleanly, to uphold the majesty of the occasion and keep the crowd from getting unruly. (Schmidt's predecessor in Nuremberg once took three strokes to behead a victim, whereupon the crowd stormed the gallows and pelted him with frozen mudballs.) So executioner was an important office, and executioners for major courts were well paid and received all sorts of exemptions from taxes and duties and the like.

On the other hand, people feared executioners and considered them uncanny, dangerous, possibly satanic figures. People crossed the street to avoid walking through an executioners shadow. In much of Germany (but not England) executioners were forbidden from entering a church. They and their children were barred from most professions and no respectable person would allow his daughter to marry one. Yet this uncanny reputation also had its uses. Some executioners did a thriving business in body parts from executed criminals -- you may have heard of the alleged magical powers of a thief's hand, and this is only the most famous of a whole range of dark folk beliefs. Some became experts in witchcraft, playing up the notoriety they got from killing or torturing witches to sell amulets or other protections against magic.

Some also became healers. Franz Schmidt was one of these; according to his diary he treated 15,000 patients over the course of his life, deploying the usual mixture of herbal nostrums and folk Galenic lore. He also built up his knowledge of anatomy by dissecting cadavers and put this learning to use as a surgeon. Schmidt tried to escape from the executioner's role and free his children from its limitations, shifting his family's business from killing to healing. He appealed his case all the way to the Duke of Bavaria and his petition was eventually granted, lifting the curse from his line.

This basic pattern repeats all over Europe, in all sorts of ways. The authorities in church and state tried to divide the world into good and evil. Priests and doctors were good, witches bad; criminals were bad, officials of the state were good. But popular belief insisted on the ambivalence of power. People believed that a wise woman who had the power to cure would also have the power to curse. Execution might be necessary for the preservation of order, but it carried with it a taint that blackened the lives of those who performed it. Christian notions of good and evil were always mingled with an older notion of spiritual power, spiritual danger, and spiritual pollution.

And on a lighter note, here is a little story from an interview with historian Joel F. Harrington, who wrote a book about Schmidt. "Raven Stone" is what Germans called a rock marking the spot where beheadings took place:


The crowd could get too wild and unruly, or the prisoner could be bad. There was one man who was walking along with a bottle and drinking the whole way and spitting on people and when he got up to the Raven Stone he stopped and urinated in front of everybody. Then he climbed on top—still drinking—and Schmidt cut off his head while he was still holding the bottle. That was a bad death.

And why shouldn't the executioner moonlight as the town doctor? I can't think of another profession than doctor back then that resulted in more deaths. Makes perfect sense.

"Thomas Sydenham, the greatest physician of the 17th century, thought that it would have been better for many patients if the art of physic had never been invented, remarking that many poor men owed their lives to their inability to afford conventional treatment."

"I have heard the learned and pious Dr. Ridgeley. m.d. say," recalled John Aubrey, "that if the world knew the villainy and knavery of the physicians and apothecaries, the people would throw stones at 'em as they walked in the streets."

-- Religion and the Decline of Magic
-- Keith Thomas

"I can't think of another profession than doctor back then that resulted in more deaths."

Pre-modern doctors weren't morons. They tended to know all sorts of valuable information about common day-to-day ailments and practical treatments for them, and they saved plenty of lives.

People like to fixate on the more outlandish procedures and operations that have since been proven quackery, but those were the exceptional cases where more traditional remedies proved insufficient. Far overwhelmingly more common were tasks like the cleaning and dressing of wounds, the reduction of fevers, the treatment of digestive problems, the delivering of babies, etc - all things which, left wholly untreated, carry a not-insignificant risk of death or severe complications.

It's easy to ridicule the more absurd historical medicinal practices, but the vast bulk of them were perfectly sound and did immeasurable good, particularly given the ignorance of the times and the conditions of living for the common folk.

The evidence does not show that pre-modern doctors did any good on average. Obviously this is a really hard question to get at, at least before the 19th century, but what we do know is not encouraging.

For example, in the early 19th century when women started going to the hospital to give birth under a doctor's care their death rate went way up, which we know about it because some doctors called attention to this as part of the crusade for sterilization.

Roman doctors, or at least Galen, knew something about sterilizing wounds, but many surgeons of the 1700s and 1800s worked in very unclean ways and no doubt killed many patients through infection. President Garfield was almost certainly killed, not by an assassin's bullet, but by bad medical care.

If you don't know the book Shadow cites I highly recommend it; Keith Thomas is one of the very best historians.