Is the Amazon Burning? 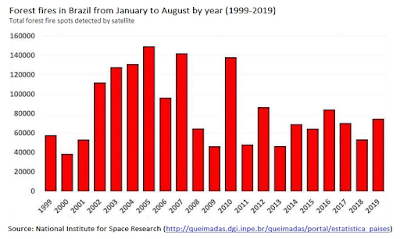 Well, yes, but no more so than in most years and a lot less than in the peak burning era 15 years ago.

And note that this graph counts fires in Brazil, not the Amazon. In the Amazon, most fires burn beneath the tree canopy and are hard to count from satellites. Most of Brazil's fires are in drier areas, as you would expect, and most of the photographs you see in the news are of those hilly scrublands. Fires in scrublands do produce a lot of pollution, but they are part of a natural cycle that his been taking place in those areas for millennia. As in the American west, tight control of fires in those areas just leads to the build up of fuel and more catastrophic fires in the long run. It may be -- some people say this, anyway -- that the intensification of cattle raising in Brazil led to more frequent fires because ranchers set them to clear scrub for grazing land, but if so that process peaked in 2002-2007 and we are now back to something like the normal pattern.

While I am on the subject, there is no evidence that if too much rain forest is cleared it will never grow back. There are places in the world where cleared forests have not regrown, so it is not an absurd idea. But archaeology shows us that between 1000 BC and 1500 AD the Amazon region was densely populated by Native American farmers who cleared vast areas of forest for their fields; after those people were mostly wiped out by European and African diseases, the forests regrew very nicely.

The Amazon is the lungs of the planet! The lungs are being destroyed by fire! Once lost they can never be replaced! This is all silly hype. Rain forest produce oxygen, but probably not as much as you think, because the intensity of life also means a lot of respiration. Cattle pastures and soybean fields also produce oxygen. And the richest parts of the forest are growing on old Indian fields.

The Amazon rain forest has shrunk a lot over the past sixty years, and I think that is a bad thing. But shouting nonsense and insulting Brazilian farmers is not going to help.
Posted by John at 8:15 AM

That's the number of fires; but what about the total areas affected/consumed by fires?!

Thank you for showing all he media noise on Brazil fires is fake news, or at least fake titles. And Bolsonaro made a point: why don't we massively plant forests in Europe? and Siberia? Spain, Poland Ukraine, have lots of unforested territory. Let's help them with that.

...you mean the region of the world that is perhaps the single largest expanse of unspoiled heavily vegetated wilderness, comprised almost entirely of forests and wetlands?

I imagine that would be... difficult... to accomplish.

You surely don't know Siberia. It's largely unforested desert, and even tundra is becoming forestable with climate changes.

"heavily vegetated wilderness" is probably the region around Baikal Lake and the rivers basins , Yenisei, Lena, Kolyma; but there are huge areas of only shrubbed soil.