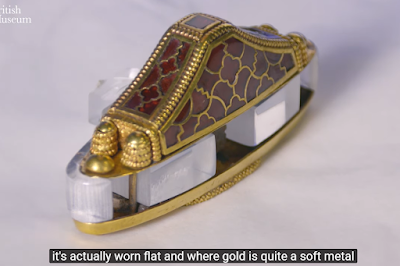 Careful inspection of the sword pommel from Sutton Hoo suggests the king buried there was left handed. And more on Anglo-Saxon swords with the same curator here.

Meet the feminists law professors who have crusaded against Title IX enforcement and on behalf of the rights of accused rapists.

The Right rises in Tuscany: "The right at the moment has a strong storytelling, the left has none," he says. "The right knows how to talk to the heart of the people: 'I know that you are insecure, you have fear.' "

Things are look bad again in Kashmir, where the Indian government has abolished the special status of this almost entirely Muslim region.

Why was the bicycle not invented until the late 1800s, two thousand years after the wheelbarrow?

Review of Secular Cycles, a book that says the history of the world goes in 300-year Malthusian cycles.

Politico story shows how Elizabeth Warren won debt forgiveness for students defrauded by a failed for-profit college. People are playing this up as a sign of what a great leader she can be but honestly it feeds my sense that she is too detail-oriented to be a good president. I think she should stay where she is and keep being a great legislator.

A plan for place-based visas.
Posted by John at 7:49 AM

When model Ts were first manufactured, if maintenance was needed owners would take them to bicycle shops. Where else?

Although it isn't mentioned (that I saw -- I only perused) in the article, a reason for delays in the invention of a bicycle might have been the weight of the metal. Difficult to power, especially uphill, and difficult to carry when you've encountered a problem. I bike a lot and I enjoy it, and the insignificant weight of the bike is major reason why.

Okay, they had left-handed swords, but did they have scissors for left handers -- the bane of every lefty in elementary school art class.