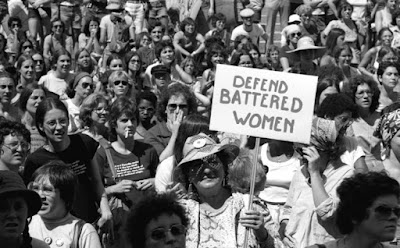 Long, interesting article in the New Yorker by Louise MacFarquar about Transition House in Cambridge, Massachusetts, one of the nation's first shelters for battered women. The shelter still exists but it has changed in many ways since its beginning. The article is interesting not just about this particular issue but as a look at radical political action of any kind.

MacFarquar covers how the theories the activists worked under changed over the years and how that influenced what the shelter did, and I found this fascinating. For example, in the beginning everyone saw battering as a form of patriarchal dominance that would end only when the patriarchy was broken; they refused to involve psychologists because they saw their mission as political. But then women began showing up who had been beaten by their female partners, and eventually they had to rethink and adopt new theories about what was going on. In general I found this essay one of the clearest statements I have read about the role of theory in political action. Another interesting element looks at how the shelter was organized. From the beginning they had allowed everyone to participate in decision making, and they tried to erase any distinction between women being helped and women helping. Everything had to be done by consensus, which meant that some things were never done. Now they have a formal board and an executive director with a corner office, and the transition happened after intellectuals within the movement began to criticize consensus meetings on a theoretical plane, pointing out that some voices were always louder and more powerful than others, and that bullies could use the very lack of structure to wear others down and get their way.

Another theme is how on-the-ground feminism has always been entangled with the fight against racism. About the early days in the 1970s:


Many volunteers had been activists in the civil-rights and antiwar movements but had got sick of being ignored and making coffee. Gail Sullivan had just come back from a stint at the Wounded Knee defense committee, in South Dakota. “The movement was dominated by men who were actively hostile to feminism, which they termed ‘white feminism,’ ” Sullivan says. “Most were very invested in traditional gender roles, which they defended as Native American traditions. This stuff was very common, men using racial oppression as an excuse to oppress women.”

But then later on, when they tried to involve more black and Latina volunteers, they ended up having to question their attitudes toward involving the police in domestic disputes. Feminists had fought hard to make spouse abuse a crime and to force the police to respond, but many non-white women disagreed:


By the late eighties, several states had passed laws requiring police to make an arrest when a domestic assault appeared to have taken place, but this change brought its own problems. For one thing, a lot of women genuinely did not want their husbands to be arrested—they just wanted the beating to stop—so the laws took away their option of calling the police altogether. Fairly often, the police, unable to determine which partner was to blame for the violence, arrested both. And, while the mostly white feminists at Transition House welcomed the imprisonment of batterers, to women of color at Casa Myrna the issue felt more complicated. “The feminist movement never really dealt with what it meant that black men were also oppressed by white men,” Curdina Hill, Casa Myrna’s first executive director, says. “It never dealt with women who were being abused but who still wanted to support their men on a political level. It wasn’t that they were not aware of it—they didn’t deal with it.”

If you have any interest in radical politics and how that part of the world has changed since the 1970s, I highly recommend MacFarquar's piece.
Posted by John at 7:39 AM