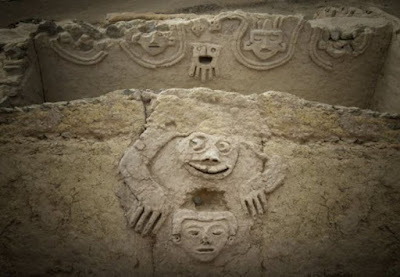 Relief from the site of Vichama in Peru, about 3,800 years old. The froggish figure may represent rain.

If your library doesn't look impressive enough, you can hire a personal book curator to fill it out.

Hydrogels are small beads filled with water, coated with polymers, and held-together by strands of DNA. Using a gene-editing technology called CRISPR-Cas12a, scientists at MIT have fine-tuned the DNA controls to alter the shape of the gel or dissolve it completely when they encounter certain DNA sequences. They have already programmed gels to dissolve upon encountering the Ebola virus, creating a rapid detection system.

Kamala Harris as District Attorney: fighting to keep innocent people in prison, refusing to censure corrupt subordinates, "forgetting" to hand over exculpatory evidence to the defense; in other words, a typical prosecutor.

The women who wait in line to hug Joe Biden. I think it is underdiscussed that while some women feel violated when a man hugs and kisses them, some women like it. The women who hate it seem to assume that other women agree with them, but not all do. A world in which people stopped hugging and kissing to avoid giving offense would be colder and lonelier for a lot of people.


An eccentric experimenter named William R. Reinick was concerned about multiple supposed illnesses and deaths from books. To test the danger of contracting disease, Greenberg writes, he exposed 40 guinea pigs to pages from contaminated books. According to Reinick, all 40 of his test subjects died.

In a Capitalist society, scaffolding is always going to be made from the cheapest stuff possible that works well enough to do the job.

No one is going to feel like the ugliness of scaffolding is a big enough problem to spend any amount of money on - much less several times the base price. Scaffolding is temporary and goes away, and the public aren't going to value less ugly scaffolding in any way that profits a company using it.

No pedestrian pays attention to which particular construction company is working on a construction project, and they won't think to themselves, "Gee, that company is so nice for using non-ugly scaffolding! I should hire them for my own job, or buy some of their stocks, or even just recommend them to a friend!" They're going to maybe notice the nicer looking scaffolding, and then immediately turn their attention to other things, and never truly remember or care about it afterwards.

The street scaffolding I'm familiar with might as well have a sign on it that says, "DANGER !! DO NOT ENTER! TAKE SIDEWALK ON OTHER SIDE OF STREET." Good advice. Perhaps it should stay that way.

Besides, this seems to be the year of the teetering crane, and where there is a scaffolding there is often a crane.

I have several Goodreads friends who won't use a book from the library because they fear contact with the cooties. This opinion is by no means rare. Myself, after a couple million years of evolution to fine tune my immune system, I figure I can handle whatever a book can throw at me. Besides, it's an adventure. You never know what you might find hidden between the pages of a book. How many people do you know who use a 5 dollar bill for a bookmark. Half written letters can be interesting. One's shopping list, less so (there are exceptions).

I have come across a couple of library books, though, that were so disgusting that EVEN I wouldn't touch them.

Cool thing. I guess we should reward them by, for example, refunding part of the effort; that would provide also an incentive for other poor countries to do the same.