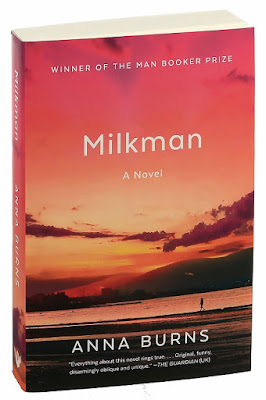 Anna Burns' Milkman (2018) is a remarkable book, and I loved it. I think it is my favorite book I have read this year. Not because it is perfect or has anything of perfection about it; on the contrary it takes many, many risks, in both style and subject matter, and some of them fall flat. But enough work wonderfully to make it a sheer delight. I listened to the version narrated by Brid Brennan, whose wonderful Irish accent may have contributed a lot to my pleasure.

The narrator of Milkman is an 18-year-old woman living in Northern Ireland during the Troubles. We never learn her name; in fact we never learn anyone's name, knowing all the characters by titles like ma and eldest sister and maybe-boyfriend. She is Catholic and her neighborhood is a bastion of the IRA, the sort of place where the police would never go without a convoy of armored cars; members of her own family and those of most of her neighbors have died in the fighting. (Actually the IRA is not named either, but referred to as the renouncers of the state, or just the renouncers.) The most impressive thing about the book is how Burns creates the atmosphere of this place and shows how it weighs on the mind of a bookish, imaginative teenager who wants nothing to do with either religion or war. This is a tight-knit, working class neighborhood with a chip on its shoulder, the sort of place where you would never admit to admiring a sunset lest you be mocked as a sissy and maybe stuck with the nickname Sunsets for the rest of your life. (See the cover of the book above.) To this already closed-in world is added the war, which means that any nonconforming behavior might be interpreted, not just as oddness, but as treason. Everything can be political:

Burns, 56, grew up in just such a neighborhood, and although she denies that the narrator is her you have to imagine that she felt some of what the narrator feels; certainly she recreates it with remarkable power and precision.

The neighborhood is of course a great place for gossip, again, adding the already rampant rumor-mongering of a tight-knit small community to the obsessive atmosphere of the secret war. It is rumor that drives the plot forward. As the narrator walks down the street, her nose in a book, a van pulls up beside her and an older man starts talking to her. Over the following days and weeks he stalks her, letting her know that he knows everything about her and her family. This is seen, of course, and gossip has her in a hot affair with this man before she has even convinced herself that anything is happening. This man, she learns, is a notorious IRA operative known only as milkman, and this becomes more fodder for the mill: other young women involved with IRA men take her aside and talk to her about the joys and sorrows of being a warrior's woman, her mother warns her that she she will end up either at her husband's funeral or monitoring his hunger strike, etc., nobody paying any attention to her protestations that nothing is happening between her and this man.

The plot and the setting create a lot of interest, but the wonder of the book is the narrator's voice. Here she is on what her mother calls "black days:"


She meant depressions, for da had had them: big, massive, scudding, whopping, black-cloud, infectious, crow, raven, jackdaw, coffin-upon-coffin, catacomb-upon-catacomb, skeletons-upon-skulls-upon-bones crawling along the ground to the grave type of depressions.

Sometimes the words pile up to a baffling degree, but mostly I found them to be an irresistible torrent that I was happy to have sweep me away.
Posted by John at 8:30 AM

I rarely listen to books, as my mind drifts away from the voice building on what I've already heard, and when I come back to listening I've lost the thread of the narrative. (This is not a problem with non-fiction, which I have listened to with some enjoyment on occasion; I guess what I miss is less vital?)

I suspect that the rolling, flowing lists of descriptors works far better aurally than visually for this author-- if I can "hear" that passage it's wonderful; reading it not so much: it seems to heap a pile of terms on my head.