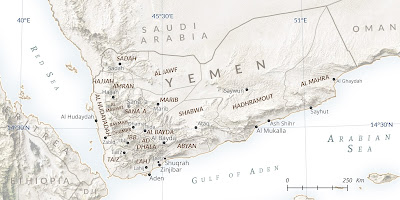 The Houthi movement that dominates Yemen, which now calls itself Ansar Allah, has proved remarkably adaptable. They began around 2004 as a bunch of badly organized guerrillas who could do little more than set bombs and stage ambushes. But as the Yemeni government collapsed under the weight of its own incompetence, venality, and brutality, they quickly metamorphosed into a fighting force capable of taking or defending towns, and in 2014 they made an alliance with a faction of disgruntled army officers, staged a coup, and took over the capital of the country and most of the government.

This victory caused Saudi Arabia and its allies to launch an intensive air campaign against the Houthi regime using up-to-date US planes, missiles, and radar. Billions have been spent in this war, and the Saudis have halted the advance of the Houthis, preventing them from taking over all of Yemen. The Saudis keep the front lines of the conflict under constant aerial surveillance, attacking any group of vehicles and even launching million-dollar missiles at lone men carrying guns.

The Houthis have adapted by dividing their forces into units of 3 to 5 men, never more than can fit in a single vehicle, and they cache weapons near any place they might want to fight so their soldiers can travel around unarmed. They have stopped using any sort of electronic signaling. They have filled combat zones with networks of bunkers connected by zig-zag trenches. As a result they are able to concentrate their men to repel any attack on their lands despite the constant presence of Saudi fighter-bombers overhead.


Where Ansar Allah has been notably more successful has been in the raiding war along Saudi Arabia's border, where it has fought a Hezbollah-style harassment campaign against Saudi border forces. Houthi forces have achieved great tactical success against Saudi border posts through offensive mine-laying on supply routes and ATGM [anti-tank guided missile] strikes on armored vehicles and outposts. The Houthi military has sustained more than three years of continuous raids and ambushes, demonstrating its resilience and depth of reserves. Ansar Allah is now one of the premier practitioners of offensive mine warfare in the world, utilizing a range of explosive devices, concealment tactics, and initiation methods.The Houthis make very effective propaganda use of video from such raids, with a dedicated cameraman attached to all raiding parties, irrespective of size. By March 2018, the Houthi movement had also fought a long-running deadly ‘cat-and-mouse’ game of rocket launches under Gulf coalition aerial surveillance, launching 66,195 short-range rockets into Saudi Arabia, killing 102 civilians, wounding 843, and depopulating several hundred small villages.

Lately the Houthis have been attacking Saudi oil facilities hundreds of miles from the border with missiles and drones.

All of this comes from a report posted on the web site of the West Point Center for Combating Terrorism. The report notes that while the Houthis now get a lot of support from Iran, that did not happen until after Saudi Arabia intervened in the Yemeni civil war. Even the US military recognizes that the Saudi claim that they had to intervene in Yemen to block Iranian schemes is baloney.

Of course by intervening in that war the Saudis have created exactly the situation they feared, an Iranian ally on their southern border, so how they will extricate themselves from this quagmire is a hard question. One doubts the Trump administration will be much help.
Posted by John at 8:00 PM

Sounds a lot like how the US military struggled against the Viet Cong.

Simple, low-tech solutions are typically inconvenient, but they still work. When you can force a powerful, wealthy enemy to waste their resources in a war of attrition that drags on as one endless "seige", you can slowly turn a losing war around.

For wars to be successful they need meaningful goals, those goals need to be achieveable, and achieving those goals must be affordable. Otherwise, you lose.