The (Non) Domestication of Cats 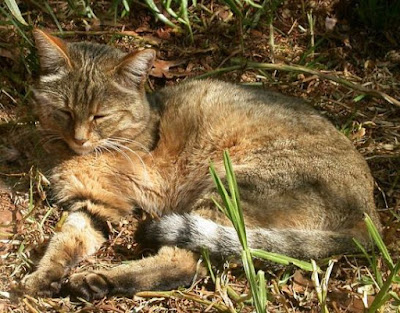 A major new study has been published on the historical genetics of house cats and their ancestors. The findings are very interesting, even though they confirm what most people had long suspected. First they show that all domestic cats are descended from one subspecies of wild cats, Felis silvestris lybica, native to north Africa and the Middle East (in the picture above). It seems that the first cats to live with humans began hanging around farming villages in the Middle East before 6000 BCE. Then in classical times cats from Egypt spread widely across Europe and west Asia; modern domestic cats are descended from those two groups. The study shows that cats found in human settlements remained genetically nearly identical to wild cats until the middle ages, when they began to be bred for different color types and so on.

So modern domestic cats are different from their wild ancestors. But they are much more similar to wild cats than dogs, horses, cows, or pigs are to their wild ancestors, and they lack the common suite of features (all based on neoteny, that is, looking more like babies) that is shared by other domesticated mammals.
Posted by John at 7:43 AM

Well I mean, if you asked me if cats are more or less domesticated than dogs, I would have immediately said less purely on their behavior.

Domestication results in a dependant animal that looks to humans for help and answers when it can't handle a situation. Cats do that a lot less than other domesticated animals do. They're highly independent, and they readily turn feral if abandoned.

Now, obviously some cats are more domesticated than others. I grew up with a cat who was basically feral, who lived outside, who hated to be touched, and who ate the dry food we put out for her but was also a skilled hunter who would routinely disappear for weeks and live in the savannahs and the scrub without any aid whatsoever. In contrast, my current cat is super domesticated, being highly affectionate and awkwardly clumsy, readily relying on humans for all his needs.

And yet, I imagine both of them have very similar genetics, perfectly typical of modern cats in general. So I wonder if perhaps there's a level of genetic adaptation a creature can attain where they become "flexibly" domesticated, able to fend for themselves as needed, but willing to behave in a dependent way when that makes more sense for their wellbeing.

If my "feral" cat had lived in an environment without ample prey, I imagine she would have become more affectionate in order to get food from us. Likewise, if my current cat ended up lost in the wilderness unable to rely on people for care, I imagine he'd pretty quickly adapt to become semi-feral and take care of himself. And I think probably the determining factor between the two lifestyles for a cat is how they are raised, and what they are used to.

The story of my Sweetie Pie (no, I did not name her) is an interesting one, given Verloren's musings.

Sweetie was born feral, and lived feral long enough to be TNR'd. (She's got the clipped ear.)

But she found a place she liked, ingratiated herself with the two resident dogs, and got them to introduce her to the humans, who said, "Oh what a sweetie pie!" and adopted her.

They had to leave her when a new position forced them to move to DC and an apartment (no clue what they did w/ the dogs, btw!) and so turned to the local Animal Welfare League to rehome her. They touted her to me, and when I went to meet her, where she'd been living outdoors with occasional feeding of dry cat food, I was instantly smitten when she looked up at me, said something (She's a tortie, and they're notorious talkers.), and promptly rolled over for a belly rub. I'm sure she learned that from the dogs :)

She's adapted quite well to being an indoor-only cat, with a 12x16 ft screened porch 15 ft above ground level for fresh air. She's gone walk-about twice, both times coming home w/in a couple of hours. The second time, she went out the front door and came home around the back, up the stairs to the screen porch (where I'd left the door a bit ajar), and in through her cat door.

I am certain she'd survive if returned to outdoor life, but she is the laziest, food-beggingest cat I've ever had. But sweet as can be!

" they lack the common suite of features (all based on neoteny, that is, looking more like babies)"

Take a look at images of show Persian cats. They are definitely suffering the fate of being bred to look like human babies, with all the problems associated with that.