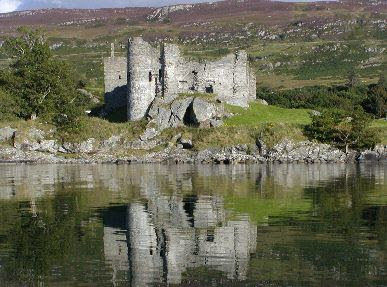 Castle Sween may be the oldest stone castle in the Scottish highlands, although its early history is as myth-mixed as all other knowledge of the medieval highlands. 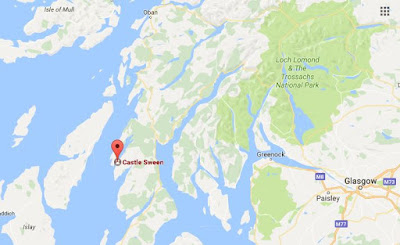 It overlooks Loch Sween on the west coast, inland from the Isle of Jura, nearly due west from Glasgow. 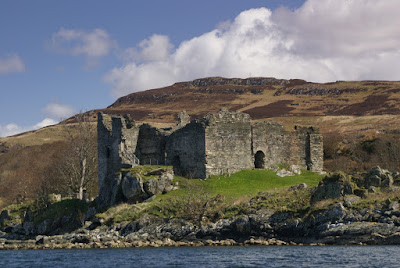 The name is the English form of the Gaelic Suibhne, said to be the name of the 12th-century builder. He was remember as Suibhne the Red, progenitor of the MacSweens. Knowledge of that dim period comes from much later sources, especially the Leabhar Chlainne Suibhne, the Book of the Sons of Sween. This is the traditional genealogy of Clan Sweeney, written in Ireland in the 16th century:


The Leabhar Chlainne Suibhne states that Suibhne was the son of Donnshléibhe, son of Aodh Aluinn, son of Anradhán. The account claims that Anradhan was the younger son of Aodh Athlamhan. When his brother succeeded their father, the two brothers quarreled with each other, and Anradhán sailed to Scotland. There he conquered half of the country before making peace with the King of Scots, by marrying his daughter. Suibhne is credited within the account to have built Castle Sween. His son is named as Maolmhuire an Sparáin ('Maolmhuire of the Purse').

Everything in that account that can be checked against other sources is wrong, so we're not dealing with an accurate record even by the loose standards of Celtic oral history. Some historians try to make sense of this, but so far as I can it might be pure imagination. Still, somebody built the castle a good while before 1300, and how cool to have a family history called the Leabhar Chlainne Suibhne. 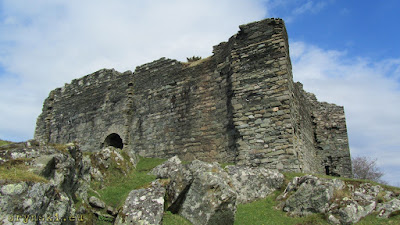 In the 13th century the Scottish MacSweens were a powerful clan, controlling land ten miles to the north and south of the fortress. But toward the end of the century they lost out in an obscure struggle with the Stewart Earls of Menteith, who ended up in control of Castle Sween. So when Edward I of England began trying to subdue Scotland in what we now know as the Wars of Braveheart, the MacSweens supported Edward in the hope that they would get their lands and castle back. It worked, for a while, but after the great warrior Longshanks died in 1307, succeeded by a son who preferred music and boating to fighting, Robert Bruce began to win the war. In 1308 he took the castle after a brief siege and granted it to Angus Og, one of his lieutenants. 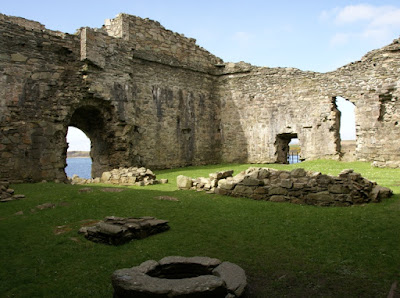 In 1310 the MacSweens were back, besieging the castle from land and sea with English help. This event was remembered in an Irish source called the Book of the Dean of Lismore as “a tryst of a fleet against Castle Sween”. The siege failed, however, and that branch of the MacSweens thereafter fades from Scottish history.

Somehow the castle ended up in the hands of the Scottish king, because in 1376 he granted it to John I, one of the MacDonald Lords of the Isles.They held it to 1490, when it was taken by the MacDonalds' great enemies, the Campbells, who made it part of their Earldom of Argyll. 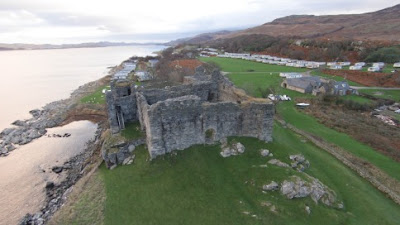 The castle was fought over again in 1647, during the event that the English call their Civil War. That conflict is known elsewhere in Britain as the Wars of the Three Kingdoms, since there was a lot more going on than just a fight between Charles I and Parliament. Castle Sween was attacked and burnt by Alasdair MacColla, a leader of Clan MacDonald who took the side of the Stuart king and the Irish Confederates against the Scottish Covenanters and the English Parliament. (The Campbells, of course, took the side of the Covenanters. That's how things worked in the Highlands.) MacColla became notorious for a campaign he led across the highlands in 1644-1645. After joining forces with the King's Lieutenant, James Graham of Montrose, he fought and won seven battles, some against great odds. He had a policy of killing every Campbell man he met, and he was accused of murdering women and children as well. This included several families' worth he was accused of burning to death in what the Campbells still remember as the "Barn of Bones." But MacColla was killed late in 1647 at the Battle of Knocknanuss in Ireland, and in general the defeat of the Stuart cause was even more complete in Scotland than in England. 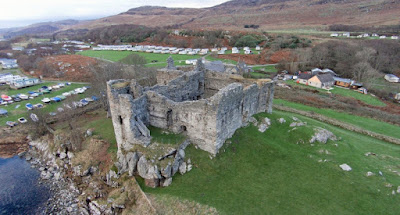 What happened to Castle Sween after 1647 I have not been able to determine. But sometime in the 20th century it acquired an interesting neighbor, the Castle Sween Caravan Park. So aerial photos of the castle are mostly full of campers. My wife pointed out that in olden times it would have been surrounded by huts, so maybe this is just modern feudalism.
Posted by John at 7:50 AM