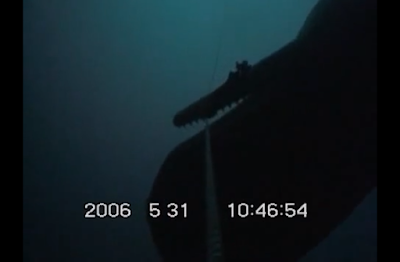 
The orcas will wait all day for a fisher to accumulate a catch of halibut, and then deftly rob them blind. They will relentlessly stalk individual fishing boats, sometimes forcing them back into port.

Most chilling of all, this is new: After decades of relatively peaceful coexistence with cod and halibut fishers off the coast of Alaska, the region’s orcas appear to be turning on them in greater numbers.

“We’ve been chased out of the Bering Sea,” said Paul Clampitt, Washington State-based co-owner of the F/V Augustine.

Like many boats, the Augustine has tried electronic noisemakers to ward off the animals, but the orcas simply got used to them.

John McHenry, owner of the F/V Seymour, described orca pods near Alaska’s Aleutian Islands as being like a “motorcycle gang.”

A report this week in the Alaska Dispatch News outlined instances of aggressive orcas harassing boats relentlessly — even refusing to leave after a desperate skipper cut the engine and drifted silently for 18 hours.

Fishing lines are also being pillaged by sperm whales, the large square-headed whale best known as the white whale in Moby Dick.

“Since 1997, reports of depredation have increased dramatically,” noted a report by the Southeast Alaska Sperm Whale Avoidance Project.

Above is a still from a video showing a big sperm whale stealing fish from a line.

I wonder when we will reach the limits of our tolerance for wild predators. Big predators eat a lot; there was a case a few years back in which clever sea lions ate almost all of the endangered salmon lining up to use the fish ladder at a big California dam. Orcas have lately been eating lots of sea otters, making people wonder about their future.

Plus when it comes to fish, there are only so many in the sea, and the more orcas eat the fewer there are for us. I would not be surprised to see major fishing nations starting to kill toothed whales within the next few years, because of the competition for fish.
Posted by John at 2:10 PM

This is overfishing in action.

Flip it around from the opposite perspective. When will the orcas reach the limits of their tolerance for us? We're the ones stealing from them. The "motorcycle gangs" comparison would absolutely be something they'd say about us. Surely it's the orcas who feel "It's gotten completely out of control"?

We are killing the oceans. We've been aware of this for decades. We do next to nothing to stop it. There used to be fish in unbelieaveable abundance. The Grand Banks Fisheries used to have more fish than anyone could imagine. Now there's almost nothing left. We take more than the seas can provide.

Big predators eat a lot? They're not the ones driving species to extinction to stuff their faces and line their pockets! And we have the gall to take offense at them "stealing" our exorbitant catches? While we destroy their very ability to survive, and rob our descendants for all time of the wonders and plenty of the earth, all in the name of naked, selfish greed?

All true, but orcas don't vote, so they won't be pressuring their representatives to do something about the declining fish population.

Ahh, yes, the importance of votes.

Unfortunately, one of the problems with representative democracy is that it provides for the representation of reprehensible things.

Things like demonizing whales for competing with us for food that we never would have been in competition with them for if not for our insane greed; and lobbying to eventually legalize violent actions against said creatures in the name of profits.

"Though you may find this slightly macabre /
We prefer your extinction to the loss of our job"
- Bill Watterson, Calvin and Hobbes

Sometimes I wonder if we couldn't simply deem certain things unsuitable for representation. Greed, hatred, fear, cruelty... why do we allow people to represent these causes? Why do we willing give a voice to things that are so overwhelmingly, undeniably, indisputeably foul? Principles and values that are we nearly all agree are destructive and awful and undermine the good in the world?

But no, people would cry foul and fight it tooth and nail, of course.

I think I need to go take a walk.

Instead of "The Birds," it's "The Whales." Kings of the land versus kings of the sea. When is the movie being made?