Classical Analogies for our Times 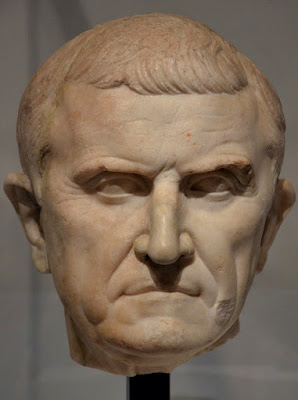 Ross Douthat says that the problem with the new production of Julius Caesar featuring a Caesar who looks like Donald Trump is not that it encourages assassination, it's that Caesar is the wrong analog for Trump. I agree completely; Caesar was a man of astonishing ability and energy, successful as a general, diplomat, politician, writer, and reformer of the calendar, and one of the greatest orators oratory-obsessed Rome had ever seen. No, for a proper Trump figure in the ancient world, we're going to have to look elsewhere:


Consider “Crassus,” the story of how a sordid real-estate speculator made a vast fortune as a Roman slumlord, rode both slave labor and the fear of slave rebellions to political influence, and leveraged his wealth to a share of power alongside his more dashing frenemies, Pompey and Caesar.

Look long at the heavy face of Marcus Licinius Crassus: Do you not see a certain resemblance to our president? Ponder his record, from the wall (!) that he attempted to build across an Italian peninsula to seal in Spartacus’s slave revolt, to the creepy and illicit pursuit of a Vestal Virgin relative (though he probably just wanted her property). Is it not, by Roman standards, rather Trumpian?

Sadly I fear that Shakespeare’s “Crassus,” now showing in the theater of my imagination, might be just as controversial as the new “Julius Caesar” were it staged as an evocation of the Trump era, since it would end with its slain-by-Parthians Crassus having molten gold, a symbol of his avarice, poured into his open mouth.

Happily our political world is somewhat more humane than Rome’s, and no fate so vile and vivid awaits any of our sagging republic’s leaders.

But when the full story of our era is written, I would bet on Trump being remembered more like a Crassus than like a Caesar — as an important but not decisive player in our march toward an ever-more-imperial executive, notable for his greed and pride and folly, but eclipsed by even more dangerous figures yet to come.

I agree about how Trump will be remembered. As for the more dangerous figures yet to come, I have my doubts. Trump has certainly shown that there is a path to power for a nationalist demagogue, and some of my friends worry that a smarter, more ruthless and (let's face it) less ridiculous man might try to follow it. But I wonder if the unrolling disaster of the Trump administration may provide a sort of inoculation against future endeavors in that direction, at least for a few decades.
Posted by John at 7:02 AM

So if Trump is Crassus, then surely it'd only be proper to stand up and shout "-I- am Spartacus!", and insist, in solidarity, on sharing any harm meted out to anyone he tries to discriminate against?