Last year the artist whose paintings earned the most in worldwide auctions was Chinese modernist Zhang Daqian (1899-1983). According to Artprice, his works 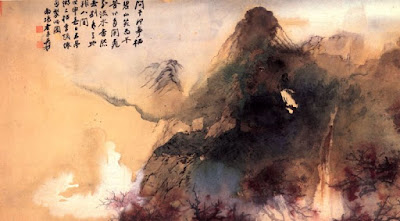 Zhang's success is part of a major trend. Several other Chinese artists were also in the top ranks of global sellers, and overall Chinese auction houses led the world with 38% of global auction revenues. One New York dealer comments,


In 1985 it was illegal to sell art in mainland China, and now there are 400 auction houses. The rules are being set by Chinese buyers. 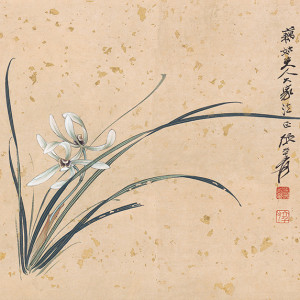 It should be noted that statistics for Chinese art sales are not any more reliable than statistics for other parts of the Chinese economy, so take them with the usual grain of salt. There are stories about auction prices inflated by corrupt deals between buyers and sellers, with the buyer actually paying only a fraction of the hammer price. Forgery is also a huge problem. But also as with other parts of the Chinese economy, it's obvious that something big is happening in the Chinese art world. 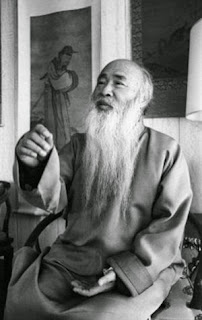 So who was Zhang Daqian? He was born into a struggling but artistic family in Sichuan province; his brother was a moderately successful painter of tigers. (Just tigers. Many, many tigers.) He later said that his first commission came at age 12, when a travelling fortune teller paid him to paint him a new set of divining cards.

He studied for a while in Japan in 1917, and in 1919 he moved to Shanghai to study painting with two of China's leading guohua or traditional artists, Zeng Xi and Li Ruiqing. In Shanghai he was able to study masterpieces from China's past, and part of his training was to copy their works. He was particularly taken by painters of the 17th century, the "Ming-Qing individualists," especially Shitao. These men pursued their own quirky aesthetic as the Ming empire first plunged into civil chaos and was then conquered by the Manchus. One wonders if his studies of that era provided him with a model of how to be an artist in a time of political turmoil.

Zhang got so good at imitating the techniques of old Chinese masters that he created several forgeries that fooled the best experts of the time. This is one, a painting formerly attributed to the 10th-century Song Dynasty master Guan Tong, acquired as an original by the Museum of Fine Arts in Boston. Claims have been made that other accepted ancient Chinese works from around the world are also Zhang forgeries, but the one in the Met mentioned by wikipedia has been confirmed as a Song original. So far as I can tell, these forgeries are the only Zhang works from the 1920s that survive, or at least that are represented online. 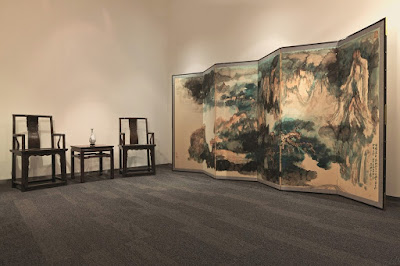 In the 1930s Zhang moved to Beijing, where he entered into a partnership with Beijing native Pu Xinyu; they created collaborative works under the name “South Zhang and North Pu.” Again, I can't find any pictures from this period, so I don't know what they looked like. As the war with Japan raged around him, Zhang threw himself into classical studies, producing many more copies of old works and amassing a collection of classical paintings. In 1940 Zhang led an expedition to the caves of Mogao and Yuli to make copies of their Buddhist wall paintings. This seems to me a perfect symbol of withdrawal from the political world; presumably the Nationalist leadership supported him because they considered it vital that the ancient Chinese tradition not be broken despite the spiraling destruction of world war, and the withdrawn Zhang seemed the perfect man for this mission. (One of Zhang's paintings from the early 1950s, Recluse in the Summer Mountains, which as you can see was made as a traditional folding screen.) 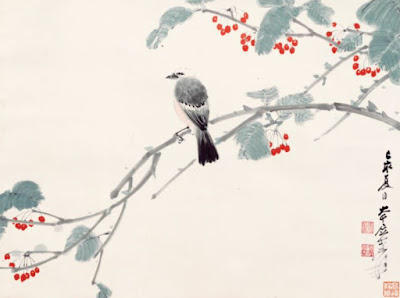 In 1949 Zhang fled the communist takeover of China, but he did not accompany the Nationalist government to Taiwan. Instead he went to South America, living in Brazil and Argentina through the 1950s. Over the next decade he devoted a lot of effort to marketing himself to western audiences as a great Chinese painter. For example in 1956 he met Pablo Picasso in an event covered by the worldwide press as the Meeting of East and West. Zhang was hugely productive throughout his life, creating as many as 500 paintings a year, a mix of huge landscapes and small studies like this one. (Bird on a Cherry Branch, 1959) 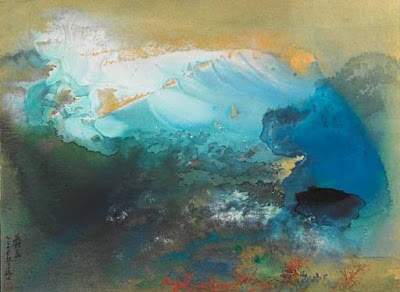 Also in the 1950s Zhang developed the style for which he is now famous, the Color-Splashed Landscape. This is Early Snow, 1965. at the top of the post is the one from which the name comes, Landscape with Splashed Colors, 1969. 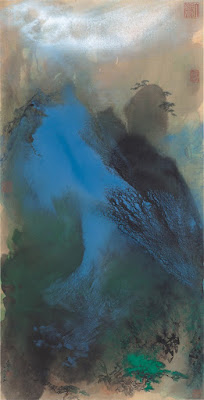 Opinions differ at to how this came about. Most western experts think Zhang was influenced by Abstract Expressionism. Zhang himself cited a traditional Chinese precedent, the "splashed ink technique" of 9th-century painter Wang Mo. Others point out that Zhang's eyesight was deteriorating, making it hard for him to carry out the sort of finely detailed ink painting in which he had specialized. But whatever the reason, the style was and remains a huge success. I love it. (Wind in Pines amidst Morning Mist, 1969)

Zhang remained an experimentalist and painted in other styles as well; this is Crimson Lotuses, 1975. 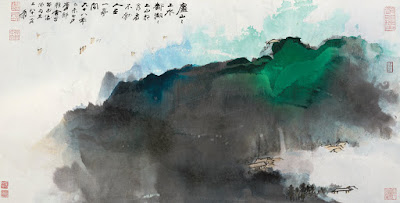 In 1978 Zhang moved to Taiwan, allowing the Nationalist government to provide him with a fine house and a chauffeur for his last years. His house in Taipei is maintained as a monument to his life. (Mount Lu, 1979) 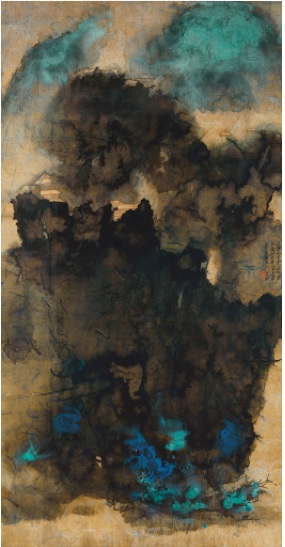 And here to close is my personal favorite, Ancient Temples amidst Clouds, 1979.
Posted by John at 8:15 AM