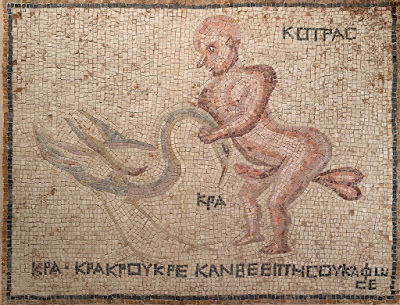 This little Roman mosaic appeared on the auction market last month. It depicts a dwarf wrestling a crane, one of my favorite ancient obscurities. The oldest mention of this theme is in the Iliad:


And when each of them was marshaled with their leaders,
the Trojans went with a shriek and a war-cry,
like birds, just as the shriek of cranes arises in the sky,
the ones who, fleeing storm and endless downpour,
fly with a shriek over the streams of Okeanos
bringing slaughter and death to Pygmy men;
high in the air, they provoke dread strife;
but the Achaeans went in silence, infused with might,
eager in their hearts to protect one another.

There are many depictions in ancient art; this is the famous Francois vase, dating to around 560 BCE and signed by the painter Kleitias. Notice that the "pygmies" are small but well-proportioned men, not dwarfs as in the later Roman examples. There are several other depictions of them riding goats. 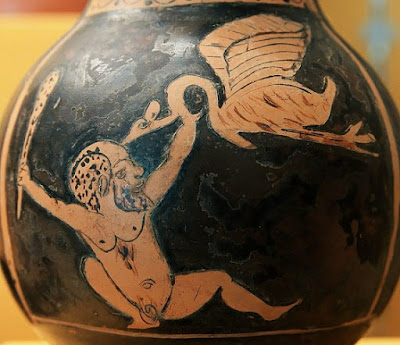 
Beyond these in the most outlying mountain region we are told of the Three-Span (Trispithami) Pygmae who do not exceed three spans, that is, twenty-seven inches, in height; the climate is healthy and always spring-like, as it is protected on the north by a range of mountains; this tribe Homer has also recorded as being beset by cranes. It is reported that in springtime their entire band, mounted on the backs of rams and she-goats and armed with arrows, goes in a body down to the sea and eats the cranes' eggs and chickens, and that this outing occupies three months; and that otherwise they could not protect themselves against the flocks of cranes would grow up; and that their houses are made of mud and feathers and egg-shells. Aristotle says that the Pygmies live in caves, but in the rest of this statement about them he agrees with the other authorities

The battle of pygmies and cranes is a very weird notion, and I have never come across any sort of explanation for it. But it must be very ancient, since it is known in China and North America as well as Europe. This scholarly article, dense with Greek and words that look English but make no more sense to me than the Greek does, connects Homer's simile to a dance done in early Athens in which the dancers imitated cranes. I am unconvinced, but if it were true that would be kind of cool, because crane dances have been done by people around the world from Lapland to Australia.

I suppose it doesn't really have to mean anything; maybe it's just a strange story that catches people's imagination, as it has caught mine, and thus got remembered. But it seems to have endured for 13,000 years, since before people crossed to the new world, so I wonder.
Posted by John at 7:26 AM