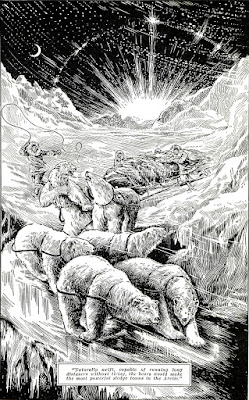 The Swedish Army once actually experimented with using moose in their cavalry forces.

Tests quickly showed that while they were fantastic at traversing harsh terrain quickly and quietly, and possessed great stamina and endurance, they were far too unreliable and difficult to control - particularly every year during the rut, when males become nearly insane, and utterly uncontrollable.

From what I've come to understand, bears are actually somewhat more domesticatable than moose are, particularly if trained from an early age. But they're not very useful or efficient creatures. They tend to become very lazy and listless if given a reliable source of food, and they're particularly lethargic in winter when they would normally be hibernating in the wild. They eat a lot, they're hard to motivate, and they're almost impossible to ride because of their skeletal structure and their loping movement. It also doesn't help that if they get scared or threatened, they can become a severe danger to their handlers.

You could indeed get them to pull a sled, possibly even at great speed, but why bother? Dogs are nearly as good and much simpler to care for and manage. Dogs eat a lot less, are a lot easier to train, are naturally more eager to please, have a natural desire to run around energetically instead of loaf around lazily, and are already domesticated and abundant. The only real downside to dogs is that they're not as strong, but realistically it makes more sense to just use bigger teams of dogs for unusually large burdens, than it does to go to all the trouble of using bears.

The drawing slightly reminds me of Philip Pullman's . Or was that the movie?

The Golden Compass, for those wondering what I'm talking about.

Indeed there is a long tradition of fantasizing about bears as companions. After all they look much like dogs and are closely related to them (they're closer to each other than either is to cats). I suppose the attraction is that they're bigger and stronger than dogs, they can climb trees, and they can walk on two legs. Plus there's the exotic element. But as G. says, this just doesn't work in practice; the root of the problem is probably that wolves are pack animals but bears live alone.