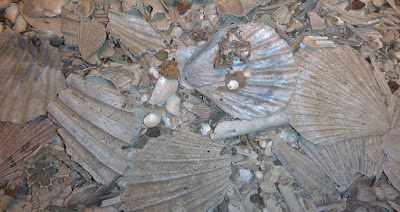 Wherever people go, even hunter-gatherers with paleolithic technology, we transform the ecosystem. When we introduce agriculture and animal husbandry, we transform it again. Here's a great example:


Paleontologists investigating the sea bed off the coast of southern California have discovered a lost ecosystem that for thousands of years had nurtured communities of scallops and shelled marine organisms called brachiopods.

These brachiopods and scallops had thrived along a section of coast stretching approximately 250 miles from San Diego to Santa Barbara for at least 4,000 years. But they had died off by the early 20th century, replaced by the mud-dwellling burrowing clams that inhabit this seabed today. . . .

Evidence indicates that the brachiopod and scallop die-off occurred in less than a century. Because this community disappeared before biologists started sampling the seafloor, its existence was unknown and unsuspected. Only dead shells remain, permitting analysis by paleontologists.

"This loss unfolded during the 19th century, thus well before urbanization and climate warming," said paleontologist Dr. Susan Kidwell of the University of Chicago. "The disappearance of these abundant filter-feeding animals coincided with the rise of lifestock and cultivation in coastal lands, which increased silt deposition on the continental shelf, far beyond the lake and nearshore settings where we would expect this stress to have an impact."

The same thing happened in the eastern US because of intensive agriculture. In the Chesapeake Bay region there was an uptick in erosion and sediment transport when Indians adopted more intensive horticulture around 900 CE, and then another uptick when European colonists arrived. But the real flood of soil into the Bay came between about 1760 and 1860, because of intensive plowing. Soil washing from carelessly plowed fields clogged harbors, transformed streams, and left huge mudflats around fall line cities like Washington, DC. Marshes became swampy forests, and open water became marsh. In some places it requires a major effort of coring and the like to figure out what the estuary was like even 250 years ago.
Posted by John at 9:38 AM