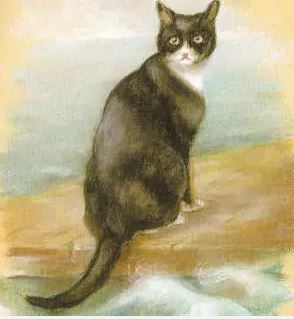 One of the great things about the internet is the window it can give you into other people's delightful obsessions. Consider the amazing wikipedia article on Ship's Cats, obviously a true labor of love. Part of the table of contents:

That's more notable examples than they have for most categories of famous people. Let's hear the tale of one of the examples, the famous Unsinkable Sam:


Previously named Oscar, he was the ship's cat of the German battleship Bismarck. When she was sunk on 27 May 1941, only 116 out of a crew of over 2,200 survived. Oscar was picked up by the destroyer HMS Cossack (ironically one of the ships responsible for destroying Bismarck). Cossack herself was torpedoed and sunk a few months later, on 24 October, killing 159 of her crew, but Oscar again survived to be rescued, and was taken to Gibraltar. He became the ship's cat of HMS Ark Royal, which was torpedoed and sunk in November that year. Oscar was again rescued, but it was decided at that time to transfer him to a home on land. By now known as Unsinkable Sam because of surviving the three sinking-ships, he was given a new job as mouse-catcher in the Governor General's of Gibraltar office buildings. He eventually returned to the UK and spent the rest of his life at the 'Home for Sailors'. A portrait of him hangs in the National Maritime Museum in Greenwich.