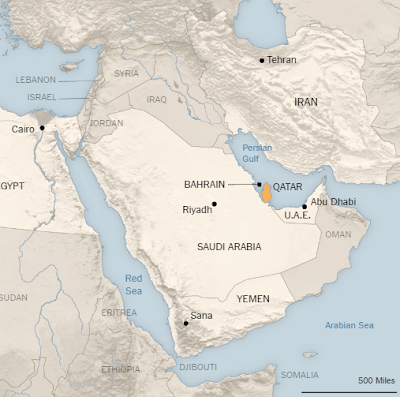 Earlier this week Saudi Arabia, along with the United Arab Emirates, Egypt, Bahrain and Yemen – that is, the Yemeni government recognized by the US and Saudi Arabia – all severed diplomatic ties with Qatar. Except for Egypt, they also cut off direct air travel and ordered their citizens in Qatar to come home. (Tens of thousands of Egyptians work in Qatar.) This puts the US military in a real bind because our air base in Qatar is the key piece in our Persian Gulf defense infrastructure, which also includes major bases in Bahrain and Saudi Arabia.

I spent some time last night trying to find out what this was all about and discovered disappointingly little. Pundits who can be counted on to mouth off about any foreign policy incident, interpreting it as proof that their views of the world are correct, have had nothing to say. (Yo, Tom Friedman!) Most of the links I have found have been to foreign policy journals and web sites with paywalls, as if nobody but diplomats or oil speculators would have any interest. But this strikes me as an important development, and I would really like to know more.

The pretext offered by the Saudi government was that Qatar is aiding their enemies in Yemen, the Houthis. Nobody in the west seems to take this very seriously. Instead westerners point to tensions that have been simmering for some time that especially relate to events in Syria and tensions between Saudi Arabia and Iran:


Qatar, one of the richest countries in the world, has used that wealth in recent years to play an outsize role in regional politics. It has often sought to cast itself as a broker, trying to mediate the region’s intractable conflicts. But just as often, it has ended up angering all sides.

Its actions are a study in contradictions. Qatar has good relations with Iran, but hosts the American air base. It is helping to fight the Iranian-linked Houthi rebels in Yemen, and it is backing insurgents fighting Tehran’s ally, President Bashar al-Assad of Syria. Yet it has also established back channels to Iran and brokered deals with it.

Tensions had been building for years. There was Qatar’s support for the Muslim Brotherhood, which challenged the established order in Egypt before being suppressed by the current government. Qatar also has supported Hamas, which governs the Gaza Strip and is a rival of the Palestinian Authority. And the broadcasts of the Pan-Arab news network Al Jazeera, which Qatar funds, have long ruffled feathers across the Middle East.

There was a weird incident last year in which an Iran-backed militia in Iraq took hostage a large party of wealthy Qatari falcon hunters, including members of the royal family, and held them for ransom. They were finally released in April after 16 months of murky negotiations involving Qatar, Iran, Iraq, and various factions in Syria. The Qatari royal family paid millions to secure the release of the hostages, only to be accused by some prominent Saudis of orchestrating the whole thing as a way to subsidize Iran-backed factions in Iraq and Syria.


The Saudis next escalated the dispute with Qatar considerably. The Saudi media reported May 28 on an open letter from the Al-Shaykh family, the descendants of Muhammad Ibn Abd al-Wahhab. The letter is signed by all 200 of the male descendants of the founder of Wahhabism in the kingdom. The al-Shaykhs are the al-Saud's critical partners in the ruling of the kingdom and provide its religious legitimacy. The minister of Islamic Affairs and the grand mufti both signed the letter.

The letter accuses the emir of an unidentified Gulf emirate of falsely claiming that he is a descendant of Wahhab. This false claim is not only "fabricated" but it also is allegedly being used to misinterpret Islam. The letter demands that the bad emir change the name of the largest mosque in his country, currently named the Shaykh Muhammad ibn Abd al-Wahhab Mosque.

That would be Qatar, of course.

The immediate trigger for the diplomatic break seems to have been the summit Trump and the Saudi King staged last month, which was supposed to present a unified front against Iran. Instead it drove into the open the dispute between the Qataris and the Saudis. Some also say that Trump's firm support for the Saudis emboldened them to take a harder line. It certainly irritated the Emir of Qatar, who publicly chided the Saudis for putting too much faith in a president obviously distracted by domestic troubles. (Incidentally this was also the line taken in Pakistan, where a spokesman criticized Trump's "bluster" and a government-allied newspaper called the summit "theater of the absurd." The Pakistanis have been wicked in Afghanistan but they seem genuinely committed to avoiding war with Iran.) 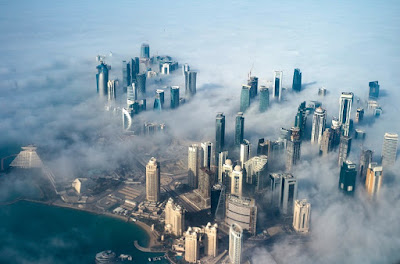 As you can tell, the thing that captivates me about this dispute is the weird mix of hyper-modernity and medieval swagger. On the one hand these are modern nations whose capitals are hi-tech mega-cities full of globe-trotting businessmen; that's Doha, Qatar above. On the other hand this really sounds like war talk to me. I don't see a straight out Saudi assault on Qatar, which is protected by American missile batteries, but I wonder if there is a real danger of escalation. What if there is a terrorist attack in Saudi Arabia or Egypt and some high Qatari official is accused of abetting it? What if documents (forged or otherwise) are captured in Syria that seem to show Qatari support for the Islamic State or al Qaeda? What if there is another uprising of Shiites in Bahrain or eastern Arabia and the Qataris lend them vocal support and covert aid? We've already seen Lebanon and then Syria descend into civil war; could the same thing happen in the rich Gulf states? And what would the US military do if fighting erupting right outside the gates of our bases?

And might this end up fueling Saudi-Iran tensions and maybe lead to a regional war?

I don't have any particular scenarios in mind and I don't really expect a war. But I also wouldn't dismiss the possibility, and it doesn't help my confidence to imagine Trump and his people trying to keep the peace.

Now President Trump is personally taking credit for the isolation of Qatar via twitter:


During my recent trip to the Middle East I stated that there can no longer be funding of Radical Ideology. Leaders pointed to Qatar — look!

So good to see the Saudi Arabia visit with the King and 50 countries already paying off. They said they would take a hard line on funding...

Perhaps this will be the beginning of the end to the horror of terrorism!

Good luck with that, Mr. President.

Good article a week ago in the Post provides background.
Posted by John at 8:51 AM