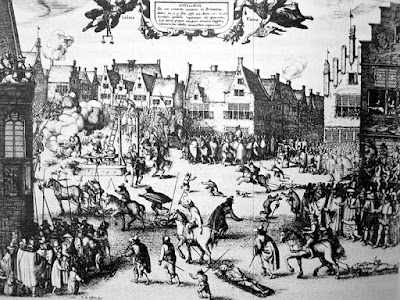 Executions used to be major public spectacles attended by thousands, and sometimes admission was charged for the good seats. But now the state of Arkansas is having trouble finding enough volunteers to fill out the six witnesses that state law requires for an execution.

Even many prison officials seem convinced that witnessing an execution is bad for you. A group of former wardens recently wrote a letter to Arkansas' governor protesting the state's plan to execute eight prisoners in a short period, because of the stress on prison staff:


Even under less demanding circumstances, carrying out an execution can take a severe toll on corrections officers’ wellbeing. For those of us who have participated in or overseen executions, we have directly experienced the psychological challenges of the experience and its aftermath. Others of us have witnessed this same strain in our colleagues.

Prison officials now speak of depression and post-traumatic stress disorder among staff involved in executions. Allen Ault, a former corrections commissioner, oversaw five executions over the course of two years and ended up opposed to the death penalty, partly because of its effect on the executioners. He told NPR:

Even back in the bad old days, executioners were sinister, uncanny figures, rumored to have satanic powers; hence the black hood they sometimes wore to keep from being recognized. Now in the age of anxiety the fearful miasma of state murder has spread to anyone watching, and the process may have to end because nobody sane wants to go near it.
Posted by John at 11:07 AM

A grimmer possible alternative would be to automate the process. Hopefully not, but I'm certain someone out there is just waiting for the chance to capitalize on the idea of robotic executioners.

Interesting, G, but would that change anything, or does it move the psychological stress to the keepers of the robots? How many levels of indirection are required before one truly feels not responsible? How much does "not being physically present" matter? Enough?

Good questions, Shadow Flutter... have any of the governors who signed the warrants exhibited the described signs of stress?

Do Governors or judges sign the execution order? May differ state to state. I remember at least one judge publicly bemoaning having to sign execution orders. Sometimes the same judge has to sign the same individual's execution order several times because of stays, etc. I guess you have to sign a new one each time the date changes. That too may differ from state to state. Judges tend to not speak publicly, but I would think there are those who have nightmares over it.

We already have some answers to these questions.

Look at the military. Army grunts on the ground with rifles tend to get PTSD, but Air Force pilots dropping bombs from 30,000 feet are more readily able to view their actions abstractly and from a distance. Insulation isn't perfect, but it can and does work to some degree, as horrible as it is to say.

And of course, there's always the old alternative of conditioning people. If there aren't enough psychopaths around to perform executions, you can always just create more, if you have the stomache for it.

Combine the two factors, and you can get people to do most anything - especially if you can convince them to foist responsibility onto someone else, as in the classic defense of "just following orders". Look at the famous Milgram Experiment, and how many people allowed themselves to be pressured into obedience via the strength of authority figures.

I'd say the executioners would need a preparation ritual and then a cleansing ritual. Not seeing executioned guy's face and distributing the responsibility over many people would be another thing to implement. I speculate that this could help with keeping them mentally healthy.