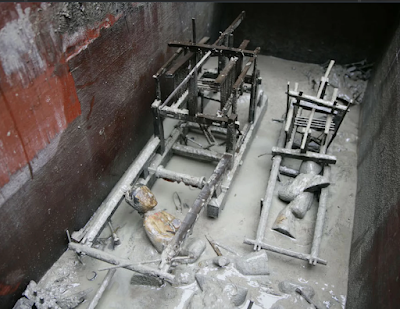 The tomb dates to the 2nd century BCE, in the Han Dynasty. The occupant was a 50-year-old woman; according to a seal atop her coffin her name was Wan Dinu. 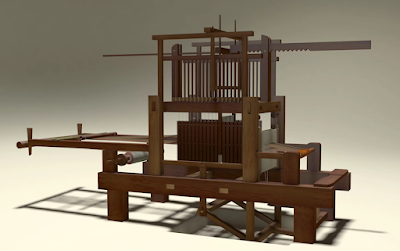 Reconstructed model and plan of the largest loom. As you can see, this is a complex machine, called a pattern loom. A pattern loom could be "programmed" to produce complex geometric patterns. This is the oldest such loom known. Experts have long debated where these looms came from, and China has been one option; this find seems to solidify the Chinese case.
Posted by John at 12:45 PM

"A pattern loom could be "programmed" to produce complex geometric patterns."

I got a good natured churckle out of the use of quotation marks here.

We tend to think of programming as a modern concept tied instrinsically to digital computation, but in reality, programming predates modern technology entirely. Pattern looms absolutely were literally programmed to produce their patterns - just in an analogue physical method rather than a digital electric one.

The loom quite literally operates in the same way as a computer, just without electricity. It has a memory system, which can be configured to various different settings, which each specific setting altering how the machine operates and the output it produces. You program the loom by adjusting the memory to your liking and then executing the program by operating the machinery.