The Mystery of Steve 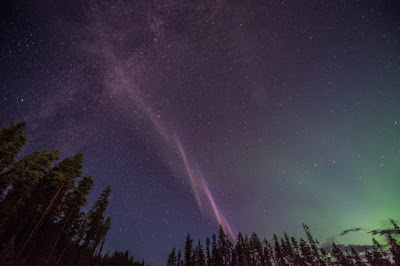 Of all the weird things to show up in the newspapers, I give you the mysterious atmospheric phenomenon known as "Steve":


If you happen to be in Canada on a clear night, look to the stars and maybe you’ll see it: a strip of light stretching from east to west, all the way from the banks of Hudson Bay to the fjords of British Columbia.

Is it a wayward piece of the aurora borealis? Or maybe a plane’s contrail? A rarely seen strip of a proton aurora? Or is it a comet’s tail?

Actually, it’s none of the above. Scientists are still working to figure out exactly what they’re dealing with.

And until that day, they’re going to call it Steve.

Steve has actually been observed now by satellites that study the earth magnetically, which is how we learned this about it:


Steve is a strip of ionized gas moving through the air at about four miles per second, with temperatures as high as 10,800 degrees Fahrenheit — as hot as the earth’s core. It is about 16 miles wide and thousands of miles long, flowing from east to west across Canada.

Photographs of the phenomenon, most of which show Steve as a glowing ribbon of neon light, have captivated aurora borealis enthusiasts in Canada and far beyond.

The name comes from a scene in the animated movie Over the Hedge in which a bunch of forest animals, terrified by a hedge partly because they have no name for it, decide to call it "Steve." This was adopted in a Facebook group of Canadian aurora watchers and for now it seems to have stuck.

I considered the possibility that this is an elaborate joke, but it seems to be appearing in all the media outlets I trust the most.
Posted by John at 7:24 AM