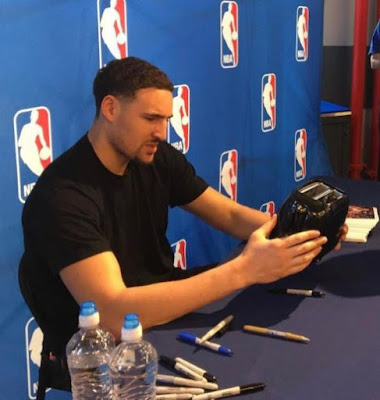 Professional athletes sometimes have signings, usually because the owner of some store or sponsor of some event pays them to spend an hour or so signing whatever people bring in. Usually people bring in jerseys or programs from big games or other sports-related memorabilia. A few weeks ago Klay Thompson of the NBA's Golden State Warriors was at one of these signings when someone presented him with a toaster. After puzzling over this for a moment, he went ahead and signed it.

The Warriors had just lost three in a row, but after that fateful act they proceeded to go on an amazing win streak. The Toaster Streak, as fans call it, currently stands at 13 in a row, and fans of other teams have started presenting toasters for their own stars to sign.