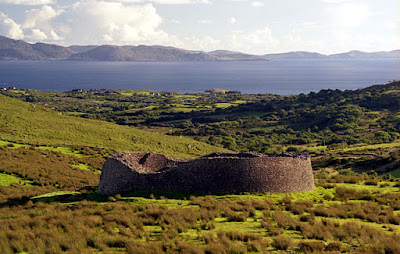 In Kerry, near the southwestern tip of Ireland, not far from the village of Sneem, at the head of a lovely valley running down to the sea, is the Iron Age stone fort of Staigue. 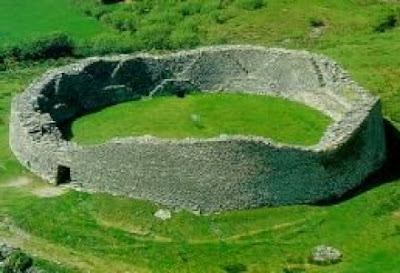 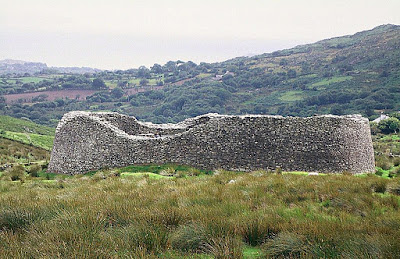 It was built between 300 and 400 CE and occupied through the glory days of pagan Ireland, the lost age of kings and druids, of chariot-riding heroes and famous lovers, of cattle raids and the bards who sang of them. 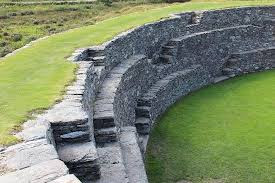 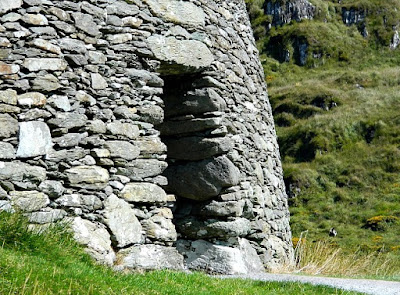 The stone walls are 4 m (13 ft) thick at the bottom and rise up to 5.5 m (18 ft) high in places; the interior of the enclosure is 27.4 m (90 ft) in diameter. Outside the wall is a ditch that is now 8 m (25 ft) wide and up to 1.8 m (5 ft) deep. There is only one entrance. Archaeologists turned up rather little when they investigated the interior, but they did find evidence of copper smelting. 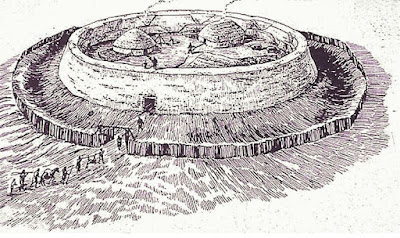 Reconstruction of the fort that appears on the interpretive sign nearby. In places like this lived the famous kings of ancient Erin. 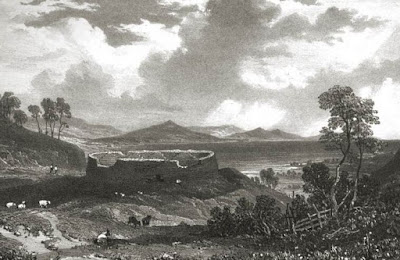 In 1815 it was being used as a cattle pen when the property was purchased by a certain F.C. Bland, who fell in love with it and may have made some repairs:


When the traveller…first approaches it, he experiences a sensation of disappointment…But when he enters it, he is struck with astonishment; and his imagination almost instantly transports him to distant ages lost in remote antiquity. He vainly endeavours to figure, in his ‘mind’s eye,’ the beings who erected it, their manners, habits, and costume; until, ‘lost and bewildered in the fruitless search,’ his mind returns to sober investigation, again to lapse into conjecture. This effect is not lost by familiarity—I have visited it a hundred times, and have always experienced the same sensation.

Print by Robert O'Callaghan Newenham, 1830, part of a series on the ancient monuments of Ireland. 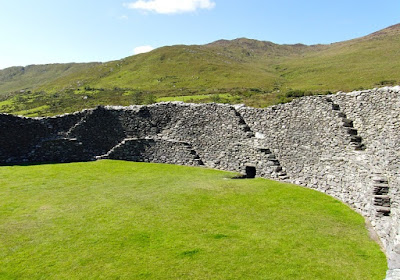 The place has long been the subject of folk tales. And it remains so, which I pass along because I regularly read that the Irish oral tradition is dying out, and it is not:


Recounting a folktale from the Caherciveen area, writer Sigerson Clifford described a football match between the fairies of Staigue and their counterparts in the similar stone fort of Cahergal.

“In the White Strand west of Cahergal the Good People used to play football matches in the bright moonlit nights of olden times…there was a man called Coneen Dannihy who heard the ree-raw and the roola-boola and the whistling one night when he was going home late from fishing, and off he marched to take a peep at them. It was a match between the Fairies of Cahergal and the Little People from Staigue Fort in Caherdonal, and Cahergal were two goals behind and it only wanting five minutes to full-time.”

As the story plays out, Coneen is recruited to play for the Cahergal team, and becomes the hero of the match for the fairies. But when his mother, fearful of the powers of the “little people,” conspired to make him late for the next match, he was struck mad by the fairies, “and stayed in the middle of the blankets for nine months, in spite of priest, midwife and doctor.”