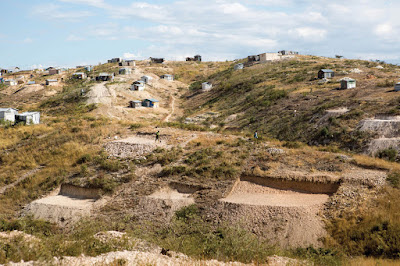 Here's one for the libertarians, a city forming in Haiti's mountains with very little in the way of government:


The earthquake displaced 1.5 million people from cities in the southern portion of the country, including Jacmel, Léogâne, and Port-au-Prince. In an effort to find space for shelters, President René Préval declared about three square miles of land north of the capital public domain. Within weeks, Haiti’s government, the US Central Command, the United Nations, and an NGO founded by actor Sean Penn began constructing about 2,000 temporary shelters on approximately a hundred acres that came to be known as Corail, and encouraged people who’d been squatting in tents in Port-au-Prince to move in.

To many in Haiti, this idea of public land meant it was theirs for the taking, to possess and to own, to farm and to raise a family. No land titles were given, and there was no guarantee of how long people would be allowed to stay. Nonetheless, desperate for space, tens of thousands of Haitians flocked to the area, arriving from the camps that had erupted throughout the capital-. Some came from places that were hardly affected by the earthquake at all but who’d been living indebted to landlords, paying hundreds of dollars in rent each year, in a country where most people live on less than $2.50 a day. Establishing a foothold here was a way to become homeowners for the first time, and to finally escape the noise and hustle and violence of the cities they found so suffocating.

Among the exodus, leaders emerged with a vision for a do-it-yourself city, while neighborhood committees took shape to help plan an informal infrastructure with the hope that the Haitian government or an NGO or some sympathetic benefactor would soon step in to help. On one occasion, residents set about buliding a road by forming a konbit, or team of volunteers, to clear rocks from a chosen route, passing them down the line. After months of fruitless waiting for the government to provide electricity, some neighborhood committees launched crowdfunding campaigns to buy materials to create an electrical grid of their own. 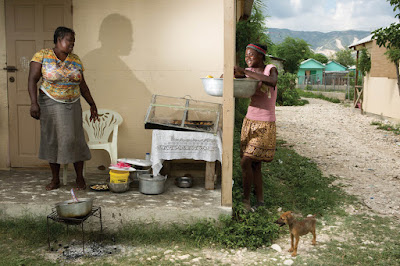 Thousands of permanent houses have been built, and hundreds of businesses are functioning. It's fascinating, and another part of the mysterious tragedy of Haiti. I have read dozens of stories about the creativity and energy of Haitians, and how they throw themselves into solving problems, and yet the country remains famously poor and dysfunctional.
Posted by John at 1:09 PM

Why do we keep acting like we've never before seen minimally governed settlements? There are already a number of well documented examples, and they typically all end up being places you probably wouldn't want to live if given the chance.

There are only so many possible outcomes. When you get lack governance, you open yourself up to exploitation. In most cases where exploitation doesn't occur, it's because a settlement is too poor or undesireable to bother with. When there's actual money to be made, organized crime steps in to fill their pockets off human misery. And if you combat the criminal element by strengthening the local government, you're no longer minimally governed.

Nature abhors a vacuum. You can't maintain a minimally governed settlement unless it is isolated from other systems of rule.

Venice started as a collective or commune of poor people living in swamps that fell between the cracks of feudal lordship, of too little value or importance to put effort into ruling over. But as they grew and became profitable, all their neighbors took note and started trying to take control for themselves, and thus the Venetians had to strengthen their government, make it official, legitimize and regulate it, and before you know it they went from practically ungoverned to one of the most efficient and draconian administrative bureaucracies in Europe at the time.

In northern Germany, the peasant's republic of Dithmarschen followed much the same course, just on a lesser scale and with a darker end. A swampy region neglected by the lords who ostensibly owned it, at the end of the day it remained de facto independent and self governed primarily due to a combination of little incentive to reconquer it, and a surprisingly effective local militia. It also helped that they sought protection and aid from the Hanseatic League at time.

But eventually they were overwhelmed and subjugated by Denmark, and that was the end of things. They started paying taxes, were subject to the laws and religion of the crown, and lost most of their autonomy. And yet, life on the ground didn't really change all that much - the region remained poor, rural, undeveloped, and left to their own devices basically for centuries, until the construction of the Kiel Canal in the 19th century.