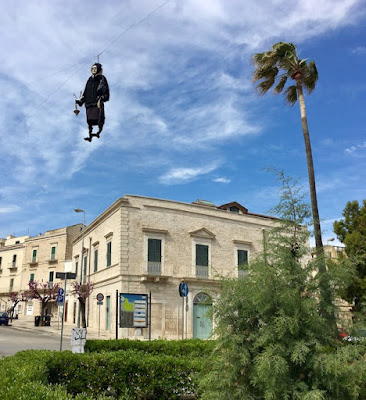 One of Rod Dreher's readers spent Holy Week in Bari in southern Italy, where he took these pictures. He writes:


I asked a local what it was. And he called her a ‘Quarantana’. Apparently she’s Carnevale’s widow…they have a ‘funeral’ for Carnevale (represented as a fat man) on Ash Wednesday and the black-clad Widow (symbol of Lenten deprivation) gets hung up, carrying a spindle of thread (to represent the brevity of life), a fish (as traditionally no eating meat during Lent) and a piece of fruit (representing the coming spring) with feathers stuck in it (6 black ones for each week of Lent and one white one for Easter; one black feather gets plucked out each week). 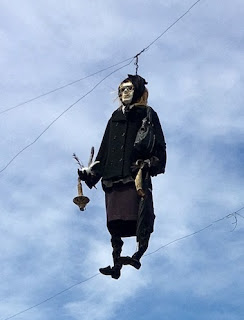 Delightful.
Posted by John at 1:27 PM

The name literally means "Forty Days", apparently a reference to the Biblical account of Jesus's fasting during the temptation of Satan.

On a tangential note, it never occured to me that the 40 day duration of a traditional quarantine might have come just as much from Biblical tradition as it did from a practical time frame to ensure any sickness ran its full course.

"Your ship's crew has the plague? Well if you survive in isolation as long as Jesus managed to fast, then I guess that'll be a sign from God that it'd be safe to let you into the city. See you next month!"