A Federalist Copy of the Declaration of Independence 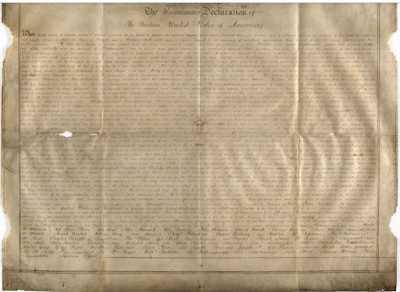 Archivists in Britain recently stumbled on a hand-written parchment copy of the American Declaration of Independence. They have presented evidence that it was made in America in the 1780s, perhaps during the debate over the Constitution. It differs from other copies of the Declaration in one important way: the order of the signatures. On the official Declaration the signatures are grouped by state, but on this copy they are not. The order seems random, and in fact it may have been generated using a common 18th-century cipher to randomize the names.

These archivists think this copy was made for Pennsylvania lawyer James Wilson, one of only six men to sign both the Declaration and the Constitution. If you've heard of him before it was probably as the poor schlub in "1776" who can't make up his mind how to vote. He was indeed ambivalent about independence, but during the debate over the Constitution he took a very strong position for national sovereignty:


Can we forget for whom we are forming a government? Is it for men, or for the imaginary beings called states?

So he had his copyist mix up the order of the signatures to show the signers as Americans rather than New Yorkers or Virginians.

Fascinating.
Posted by John at 7:20 AM

"Can we forget for whom we are forming a government? Is it for men, or for the imaginary beings called states?"

An ancient concept, but one we repeatedly and far too often forget.