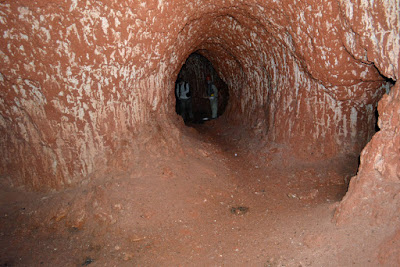 
It was in 2010 that Amilcar Adamy first investigated rumors of an impressive cave in southern Brazil. A geologist with the Brazilian Geological Survey (known by its Portuguese acronym, CPRM) Adamy was at the time working on a general survey of the Amazonian state of Rondonia. After asking around, he eventually found his way to a gaping hole on a wooded slope a few miles north of the Bolivian border.

Unable to contact the landowner, Adamy couldn’t study the cave in detail during that first encounter. But a preliminary inspection revealed it wasn’t the work of any natural geological process. He’d been in other caves nearby, formed by water within the same geology underlying this particular hillside. Those caves looked nothing like this large, round passage with a smooth floor. “I’d never seen anything like it before,” said Adamy, who resolved to return for a closer look some day. “It really grabbed my attention. It didn’t look natural.” 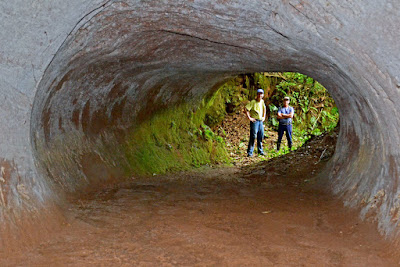 The latest thinking is that these caves are ancient animal burrows, the largest of them dug by extinct giant ground sloths. Others may have been dug by giant armadillos. They are not rare, but have been found by the dozens. Most have silted in over the millennia but a few are still open. They can be as much at 10 feet tall and 65 feet long (3m x 10m). 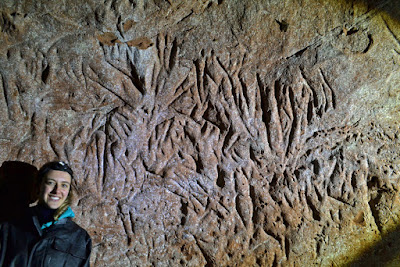 Claw marks on the walls showing the excavation technique. 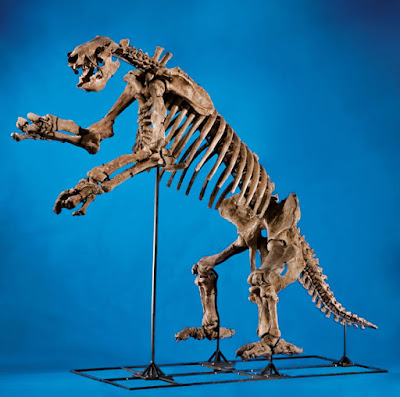 I find this fascinating. There used to be lots of big, strange animals in the world, and who know how they changed the planet. What, for example, did giant beavers do?
Posted by John at 7:40 AM

"What, for example, did giant beavers do?"

Knocked down trees and piled them up into dams, presumably.

Although given the already appreciable size potential of modern day beaver dams, I doubt the dams of giant beavers had an appreciably different effect on waterways. They probably just had larger internal chambers.