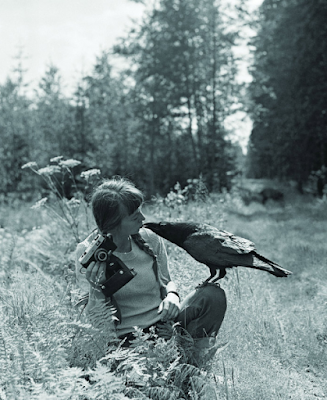 From a charming little life of Simona Kossak, a Polish eco-fanatic who lived in a cabin in the forest surrounded by tamed animals:


People called the crow a tamed villain and a thief. He terrorised half of the Białowieża area. He stole cigarette cases, hair brushes, scissors, cutters, mouse traps and notepads. He attacked people. (…) He tore up bicycle seats. He stole documents, he stole the lumberjacks’ sausage in the woods, and made holes in grocery bags. He clung at the pant legs of men, pulled at the skirts of women, and pricked the legs. People thought that Korasek – because that’s what he was called – was some kind of a punishment for sins. Stanisław Myśliński, who has scars from the bird to this day, recalls "He would even steal the workers’ pay in the woods. He once stole my permit for entering the woods. He pulled it out of my pocket and notoriously tore it apart. He loved to attack people who rode bicycles, especially girls. It was very impressive, he would attack the rider’s head with his beak, the person would fall off, and he then sat on the seat triumphantly, looking the at the spinning wheel”.

Simona’s friend says, "Once he stole my car keys. And Lech [Wilczek] said "Don’t worry, he’ll bring them back.” He took a metal rod and scared the crow "You sonofabitch, you took keys from a friend?!” He and I said to Korasek that if he brings them back, he’ll get an egg, and if he doesn’t he’ll get a blow with the rod. And the crow perhaps understood this, because after a moment, he flew up to me, furious, with the keys in his beak and threw them onto a table!”

Bożena Wajda recalls, "Once, I was walking around the reserve without a permit, and the guard saw me, he followed me to Dziedzinka and started to fill in a fine penalty. When he was handing the print to me, the crow appeared. He took the paper in his beak, flew onto the roof of Dziedzinka with it, and tore it up with his leg, on top of that roof. I had such a laughing attack that, that I couldn’t control myself, the guard didn’t know what to do, and finally just shrugged his shoulders at the whole thing. When I told this story to Simona, I thought she would die of laughter.”

Highly unusual behaviors for a crow. I would assume they were probably the results of conscious training/conditioning.

Crows are highly intelligent and social birds, as are parrots, and both put on displays of naughtiness. Having said that I'm having trouble believing the crow brought back the keys after being threatened (and a few other things), but it makes for a nice story.

Oh yes, corvids are frighteningly intelligent. But this crow is behaving very atypically.

These are intensely social birds - it's very odd to find a lone crow away from others. They're also fairly skittish. Their instinct in the wild is to avoid trouble, rather than to start it. If you approach a crow, it will retreat and come back to the spot later. They can be territorial if they feel threatened, but it absolutely uncharacteristic of them to antagonize humans unprovoked.

My assumption would be that the crow was found as a hatchling and raised among humans. This would explain why it is a lone bird, why it is so willing to approach and interact with humans unprovoked, and why it is engaged in such seemingly mischievous behavior.

In the absence of other crows to interact and play with, it will interact with whichever humans it considers to be its family. And if strangers come along, it will do things to "protect" the person it has bonded to, trying to drive off or frustrate their "rivals". This would explain pretty much all of the behaviors described in the story (assuming we take them at face value as true).

This crow has become legend.