A new salvo was fired yesterday in the ongoing debate over when humans reached the Americas. Across most of North America the first human culture that everyone accepts is called Clovis, after the site where its distinctive spear points were first found with the bones of extinct animals. Clovis spread very rapidly across the whole continent between 13,500 and 13,000 years ago, and then an offshoot did the same in South America. But across both continents a number of archaeological sites have been reported that are older than 13,500 years. This raises all sorts of questions. If there were already people in the Americas, how did Clovis spread so quickly, more quickly than Europeans did when they arrived in the New World with guns, steel and horses? And where did those earlier people go? The genetic evidence says that most American Indians are descended from a single small group of people who lived around 15,000 years ago, and the study of the DNA from a Clovis burial at Anzick in Washington state showed that the Clovis people were almost certainly that group. An invading group can come to genetically dominate the future population of an area, but it never happens that the genes of the original inhabitants completely disappear.

Which is what makes this such a great problem to argue about. 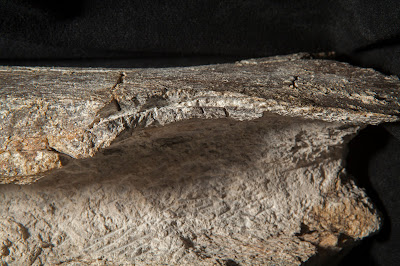 Several of the archaeological finds that are supposed to be older than 14,000 years ago are mammoth or mastodon butchering sites. What they yield is elephant bones that have been smashed open in the way that humans do, bearing scratch marks that look like the ones made by the knives of human butchers. Archaeologists use this sort of evidence all the time, for example in arguing about cannibalism. And these ancient bones do indeed look butchered. But on the other hand most of these sites have not produced any other good evidence of humans, which is puzzling. When people butcher a large animal like a mastodon they have to sharpen their tools repeatedly, whether those tools are steel or stone. Sharpening stone tools means knocking off little flakes to restore the edge. Butchering sites like the famous buffalo jumps of the American west are full of stone flakes and discarded tools that had gotten too small to be worth sharpening again. So many archaeologists (like me) have always been skeptical of these mammoth sites, without rejecting them out of hand because, as I said, the bones really look butchered.

But the latest claim from the Cerutti Site in California involves bones that are 130,000 years old. And to that I say, phooey. If there were people in the Americas from 130,000 years ago, where is the evidence? It ought to be all over, in every decent cave or rock shelter, along hundreds of rivers. Just like it is in Europe or Africa or India. So to me this claim invalidates all those other elephant butchering sites without stone tools. I cannot explain how the bones came to look like they were butchered by humans, but I find it so unlikely that there have been humans in the Americas for more than 100,000 years that I reject human butchering as the cause. There has to be some other explanation. 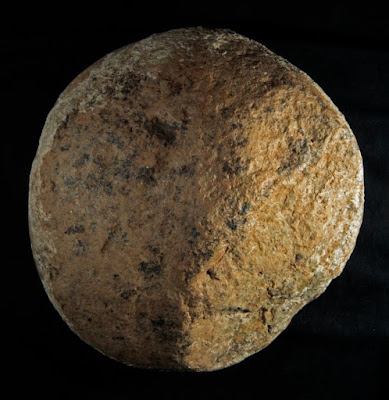 Actually the excavators of the Cerutti Site did offer a couple of "stone tools" from their site; they look like this, and they are said to be hammerstones. Count me skeptical. Hammerstones are a real thing, a very common tool type in all stone age societies, and they generally look something like this. But except in rare cases they are almost impossible to tell from accidentally battered rocks, and I have personally never found even the ones from my own sites to be very convincing.

It's going to take a lot more than scratches on bones and battered rocks to convince me that there were people in California 130,000 years ago.
Posted by John at 8:03 AM

"If there were already people in the Americas, how did Clovis spread so quickly, more quickly than Europeans did when they arrived in the New World with guns, steel and horses? And where did those earlier people go?"

"An invading group can come to genetically dominate the future population of an area, but it never happens that the genes of the original inhabitants completely disappear."

What if the people who were already present were not very numerous, or were not settled very densely?

Or what if there was an event similar to the Columbian Exchange, and the locals fell prey to some contagious disease which they lacked immunity for? If they were wiped out completely, that could explain a complete disappearance of genetic materials.

Or what if the two groups simply didn't interbreed at all for some reason, and the larger incoming group managed to outcompete the original inhabitants?

Or what if there actually weren't any significant genetic differences between the two groups, both being derived from the same origins, with the "local" population having simply been a smaller, earlier wave of immigration? Suppose the Clovis were literally the same people, just migrating later, in larger numbers, and with greater technological and cultural progression resulting in their artifacts being distinct.

That last possibility might also explain how the Clovis culture spread so quickly, as the two groups would be able to quickly reintegrate. It'd be like an army sending scouts ahead to get the lay of the land, and then relying on the information those scouts gathered when the bulk of the unit arrived.