Taking advantage of the ‘customers who bought this item also bought’ feature of online commerce, the researchers constructed a co-purchase network of political books and science books. And they found a clear division, which they label “partisan differences in the consumption of science”.

Both groups bought science books — more than 400,000 between them. But it was relatively unusual to find books that appealed to both liberals and conservatives. Members of each group — and their good friends — had different ideas about what made a good book. Buyers of “blue books” (the liberals) tended to pick from basic science topics, including physics, astronomy and zoology. “Red” customers preferred books that discussed applied and commercial science, such as medicine, criminology and geophysics. And whereas liberal choices tended to reflect mainstream thinking, “red books” tended to be co-purchased with a narrower subset of science books on the fringes of each subject.

This makes some sense to me. Many popular physics books are pretty close to religion for atheists, that is, they are mainly about the wonder, majesty and weirdness of the (godless) universe. It seems predictable that they would have more appeal to liberals. Much popular biology is suffused with environmentalist politics, and climate science even more so. It also does not surprise me at all that a substantial fraction of American conservatives has a thing for fringe science – we have all encountered cranks like that. So this study would be another piece of evidence that right and left among the book-buying class is today as much a matter of personal style and taste as anything else. 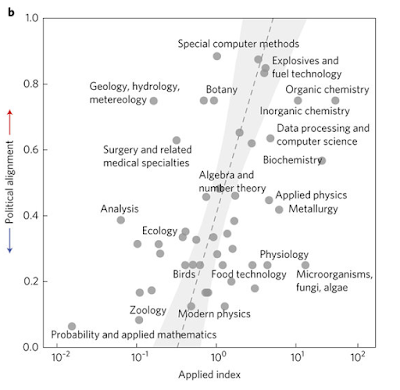 Here is one of the few figures in this study than made any sense to me. (Partly because many of them are color-coded and all the colors look the same to me. Discrimination against the color vision challenged!) The vertical axis shows political affiliation, with conservative at the top and liberal at the bottom. The horizontal axis shows how applied or theoretical the discipline is, measured in part by the ratio of patents to article citations. Applied is to the right,  theoretical to the left. How pleasing that books on explosives skew conservative, those on fungi liberal.

I would note, though, that the study was designed to exaggerate the differences between red and blue book buyers, by focusing on the most partisan titles:

And if you look carefully at that graph you note that most disciplines fall between 0.2 and 0.8, which means that people from both parties read most science books (or at least books on most topics). Biochemistry falls in the 0.4 to 0.6 center zone, so everybody follows the master science of our era. I wonder if the slight conservative skew results from a handful of books pushing something close to genetic determinism. But then why would metallurgy skew slightly liberal?

I also wonder more about the crank phenomenon. Is there a class of books on subjects like cold fusion that appeals to fringe people on both the right and the left? That is, could a study like this provide any evidence for an argument that the extremes meet around the other side of the diagram? But perhaps people of that sort worry that the government is tracking their reading habits and don't buy as many books online.
Posted by John at 8:50 AM