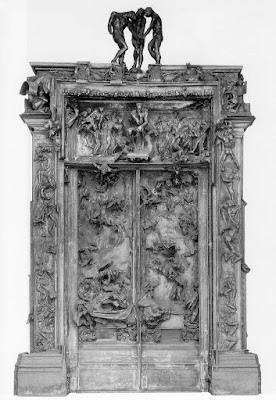 I've been listening to the Canterbury Tales in a modernized version and enjoying it very much. Just today I was struck by the description of a temple of Mars from the Knight's Tale:

And down a hill, beneath a sharp descent,
The temple stood of Mars armipotent,
Wrought all of burnished steel, whereof the gate
Was grim like death to see, and long, and strait.
And therefrom raged a wind that seemed to shake
The very ground, and made the great doors quake.
The northern light in at those same doors shone,
For window in that massive wall was none
Through which a man might any light discern.
The doors were all of adamant eterne,
Rivetted on both sides, and all along,
With toughest iron; and to make it strong,
Each pillar that sustained this temple grim
Was thick as tun, of iron bright and trim.

There saw I first the dark imagining
Of felony, and all the compassing;
And cruel anger, red as burning coal;
Pickpurses, and the dread that eats the soul;
The smiling villain, hiding knife in cloak;
The farm barns burning, and the thick black smoke;
The treachery of murder done in bed;
The open battle, with the wounds that bled;
Contest, with bloody knife and sharp menace;
And loud with creaking was that dismal place.
The slayer of himself, too, saw I there,
His very heart's blood matted in his hair;
The nail that's driven in the skull by night;
The cold plague-corpse, with gaping mouth upright
In middle of the temple sat Mischance,
With gloomy, grimly woeful countenance.
And saw I Madness laughing in his rage;
Armed risings, and outcries, and fierce outrage;
The carrion in the bush, with throat wide carved;
A thousand slain, nor one by plague, nor starved.
The tyrant, with the spoils of violent theft;
The town destroyed, in ruins, nothing left.
And saw I burnt the ships that dance by phares,
The hunter strangled by the fierce wild bears;
The sow chewing the child right in the cradle;
The cook well scalded, spite of his long ladle.
Nothing was lacking of Mars' evil part:
The carter over-driven by his cart,
Under a wheel he lay low in the dust.
There were likewise in Mars' house, as needs must,
The surgeon, and the butcher, and the smith
Who forges sharp swords and great ills therewith.
And over all, depicted in a tower,
Sat Conquest, high in honour and in power,
Yet with a sharp sword hanging o'er his head
But by the tenuous twisting of a thread. . . .

Mars' image stood upon a chariot,
Armed, and so grim that he seemed mad;
And o'er his head two constellations shone
Of stars that have been named in writings known.
One being Puella, and one Rubeus.
This god of armies was companioned thus:
A wolf there was before him, at his feet,
Red-eyed, and of a dead man he did eat.

Listening to this I thought, if there were really such an ancient temple, even in badly ruined state, they could scarce protect it from the hordes of eager tourists who would come to revel in its horrors.

Image is Rodin's Gates of Hell
Posted by John at 6:59 PM