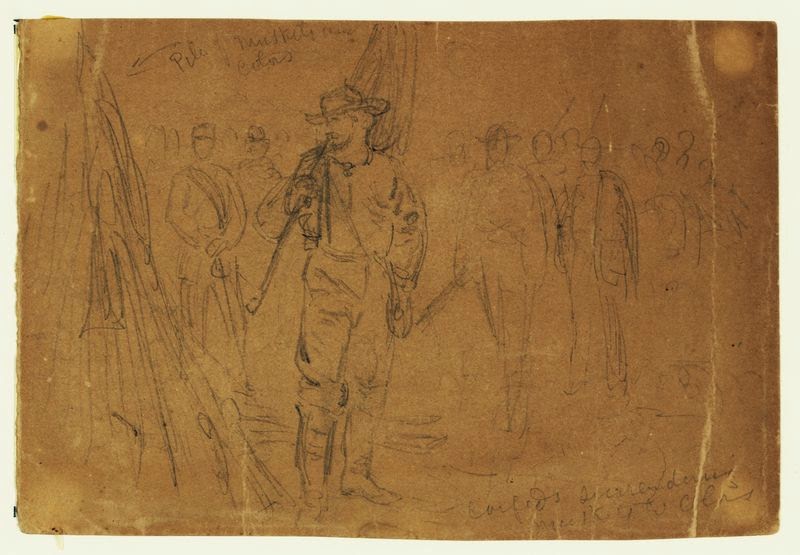 One hundred and fifty years ago today Robert E. Lee surrendered what was left of his army to Ulysses S. Grant at Appomattox. On hand was artist Arthur Woad, who made these sketches. Above, Confederates surrender their colors. 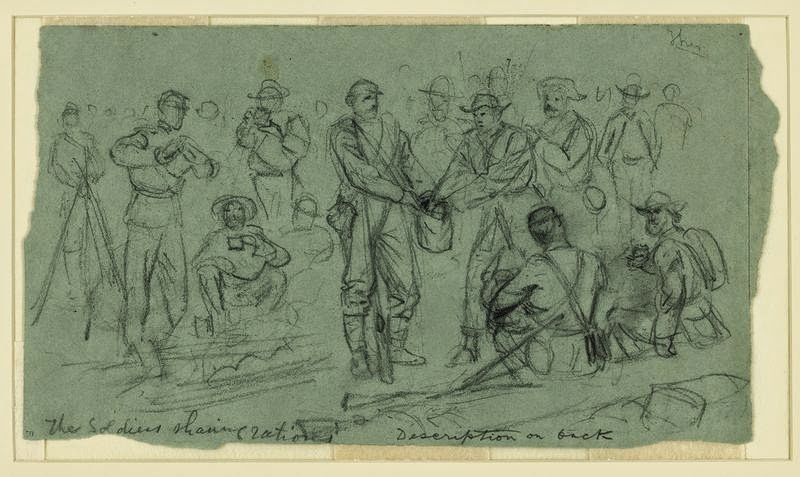 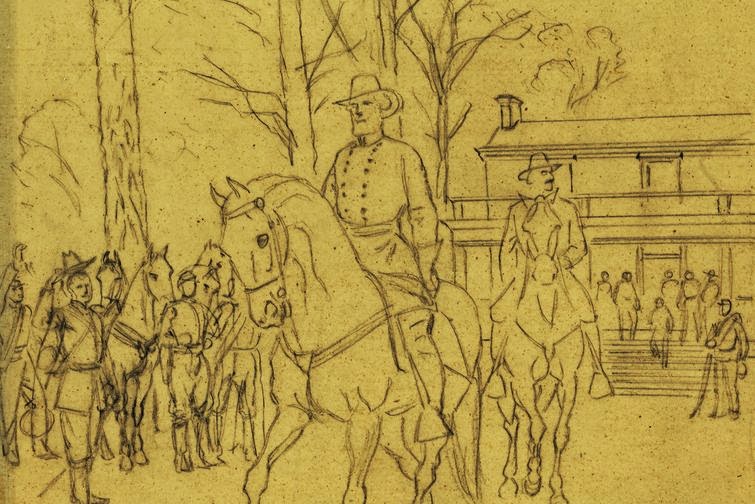 I have always loved this description by General Horace Porter, who accompanied Grant, of the two commanders:


The contrast between the two commanders was striking, and could not fail to attract marked attention they sat ten feet apart facing each other. General Grant, then nearly forty-three years of age, was five feet eight inches in height, with shoulders slightly stooped. His hair and full beard were a nut-brown, without a trace of gray in them. He had on a single-breasted blouse, made of dark-blue flannel, unbuttoned in front, and showing a waistcoat underneath. He wore an ordinary pair of top-boots, with his trousers inside, and was without spurs. The boots and portions of his clothes were spattered with mud. He had no sword, and a pair of shoulder-straps was all there was about him to designate his rank. In fact, aside from these, his uniform was that of a private soldier.

Lee, on the other hand, was fully six feet in height, and quite erect for one of his age, for he was Grant's senior by sixteen years. His hair and full beard were silver-gray, and quite thick, except that the hair had become a little thin in the front. He wore a new uniform of Confederate gray, buttoned up to the throat, and at his side he carried a long sword of exceedingly fine workmanship, the hilt studded with jewels. His top-boots were comparatively new, and seemed to have on them some ornamental stitching of red silk. Like his uniform, they were singularly clean, and but little travel-stained. On the boots were handsome spurs, with large rowels. A felt hat, which in color matched pretty closely that of his uniform, and a pair of long buckskin gauntlets lay beside him on the table.

Here is Grant's memory of the event, from his memoirs:


What General Lee's feelings were I do not know. As he was a man of much dignity, with an impassible face, it was impossible to say whether he felt inwardly glad that the end had finally come, or felt sad over the result, and was too manly to show it. Whatever his feelings, they were entirely concealed from my observation; but my own feelings, which had been quite jubilant on the receipt of his letter, were sad and depressed. I felt like anything rather than rejoicing at the downfall of a foe who had fought so long and valiantly, and had suffered so much for a cause, though that cause was, I believe, one of the worst for which a people ever fought, and one for which there was the least excuse.

Grant and Lee are such extraordinary individuals, both complex and deeply flawed men with heavily entrenched beliefs and a largely shared notion of honor and decorum. Reading about their lives never fails to fascinate, even if in many ways they both said and did things I absolutely disagree with.

The remarks of their contemporaries always seem to me the most illuminating. I'll have to research Porter, who I'm unfamiliar with, to get a better sense of the context of his statements, and what exactly he's trying to get at in his comparison.