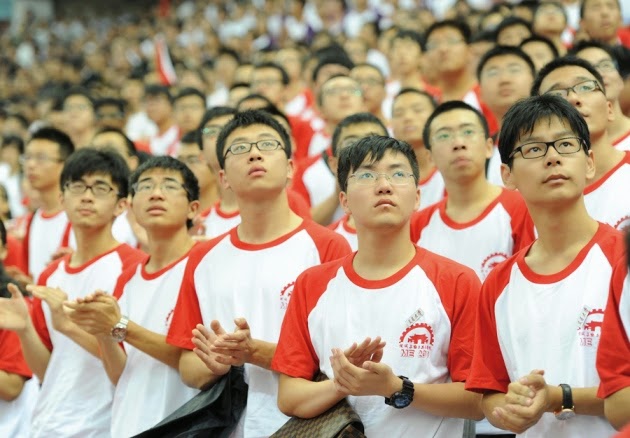 Myopia -- short-sightedness -- is on the rise all over the world. In some parts of East Asia, as many as 95% of 19-year-olds are myopic. Something about modern life is causing this; the change is happening too quickly to have anything to do with evolution, even though genes are known to play a role:


But it was obvious that genes could not be the whole story. One of the clearest signs came from a 1969 study of Inuit people on the northern tip of Alaska whose lifestyle was changing. Of adults who had grown up in isolated communities, only 2 of 131 had myopic eyes. But more than half of their children and grandchildren had the condition.

After a long series of theories and retractions over the years, scientists think they have isolated the causative factor:


After five years, one in five of the children had developed myopia, and the only environmental factor that was strongly associated with risk was time spent outdoors. “We thought it was an odd finding,” recalls Mutti, “but it just kept coming up as we did the analyses.” A year later, Rose and her colleagues arrived at much the same conclusion in Australia. After studying more than 4,000 children at Sydney primary and secondary schools for three years, they found that children who spent less time outside were at greater risk of developing myopia.

Two things about being outside might be involved: bright sunlight, and regularly focusing on distant objects. The scientific attention now is on light, and the best guess is that children need to spend at least three hours a day outside in the daylight to be protected from myopia.
Posted by John at 11:07 AM

Curious. I remember some years back seeing studies suggesting that sleeping with a night light promoted short sightedness. I remember finding the notion emminently plausible, as essentially everyone I knew with myopia admitted to having grown up sleeping with various lights when I mentioned it to them, but as we all know the plural of "anecdote" is not "statistics", and I've never heard any sort of follow up on those studies.

This most recent "best guess" seems a bit odd to me - I was outdoors every single day for several hours, even on school days, in a region of the world with abundant and regular sunshine, and yet I was wearing glasses before middle school. The same is true of the people I grew up with, as well as family members. If all it really took was three hours of sunshine a day to beat back myopia, we'd all have much better vision.

An environmental factor seems likely, but there are so many possible factors to investigate, and this study just reeks of bias. "Children need to play outside more, like in the olde days! If they don't get at least... uh... THREE hours outside each day, they'll go bli- I mean, develop myopia!"

As a confirmed indoorsman and severe myopic, I'm a bit less skeptical of the findings. But, Basilico, that end to your comment--hilarious!