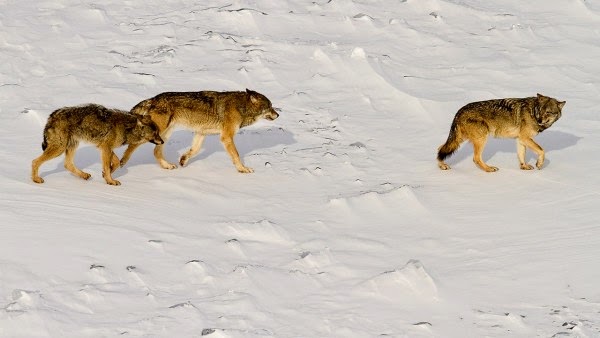 
The three wolves included a pair, probably the last ​known to have reproduced, plus a notably smaller wolf that might be their pup. The other wolves are presumed to have either died or left the island last year, in a reverse of how carnivores originally came to Isle Royale, when a bitter winter completely froze the channel to the mainland. . . .

The wolves on Isle Royale, which once numbered as many as 50, have been mostly isolated for generations, and the population has been overrun with spinal defects likely as a result of the inbreeding. This winter’s small wolf also displayed an abnormally short tail with raccoonlike stripes and a hunched back—possibly dramatic new effects from the lack of genetic diversity. “It [didn’t] look particularly healthy” in February, Vucetich says, and may be dead by now. He and Peterson collected frozen wolf scat and vomit for DNA analyses to identify the trio.

At least one wolf, a mature male, has been found dead; the others may have died or perhaps left the island across the ice, which froze solid to the mainland this winter. Without wolves the park managers are going to have to start shooting moose; the moose population has been rising 22% per year in the three years since the wolf population first started to collapse.

The interaction between wolves and moose on Isle Royale has been studied intensely for 57 years now, the longest-running study of predators and prey. But not much longer.
Posted by John at 2:39 PM

If the island at its peak only sustained 50 wolves, this seems to have been an inevitability from the very start.

We had 57 years to intervene, so I suppose ultimately it must be said that we decided it was better to let the population inbreed itself extinct than to relocate wolves from elsewhere to the ecosystem.