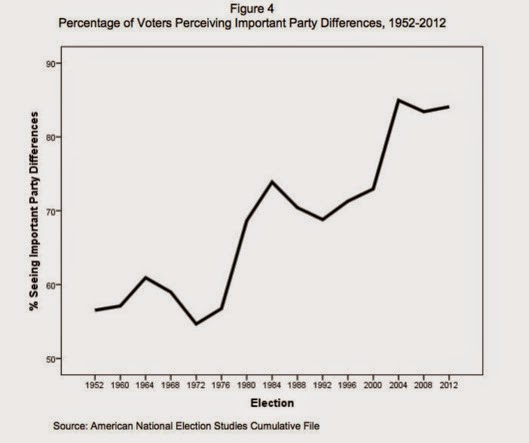 
Emory political scientists Alan Abramowitz and Steven Webster have a new paper, not yet available online, exploring the nature of the new polarization. The paper is filled with interesting findings, but the major one is an attempt to resolve a paradox. Measured by self-identification, partisanship is actually declining — growing numbers of Americans describe themselves as “independent” rather than loyal to one of the parties. But measured by actual voting behavior, the opposite is happening: Straight ticket voting continues to grow. This matches what operatives like Dan Pfeiffer have seen, and what Karl Rove saw a decade before — the swing voter had nearly vanished.

One common explanation is that it has become increasingly vogue, especially among college-educated voters, to describe yourself as independent, which implies that you form educated judgments about politics rather than blindly following the dictates of a party. Abramowitz and Webster add to this by introducing a phenomenon they call negative partisanship. That is to say, voters form strong loyalties based more on loathing for the opposing party than on the old kind of tribal loyalty (“My daddy was a Democrat, his daddy was a Democrat …”) that used to prevail. The party system has split along racial, cultural, and religious lines, creating a kind of tribal system where each party’s supporters regard the other side with incomprehension and loathing.

This discussion finds me on all-too-familiar ground. On the one hand I don't like this kind of deep polarization, and I don't like it when people vote against something rather than for something, but on the other this research describes me with disturbing fidelity. In the current climate is almost inconceivable that I could support a Republican for any national office, regardless of how much I preferred him or her as a person to the Democratic alternative -- I have become a Blue Dog Democrat. And this isn't because I have a very positive view of the Democratic Party, because I don't. It is because I regard the Republican Party with incomprehension and loathing.

I have enough knowledge of political history to understand that in the grand scheme of things the differences between Republicans and Democrats in America are not very big, and that a Republican sweep would hardly be a major disaster for the nation. But I believe it would be a bad thing, bad enough that in any national race I would rather vote for a corrupt Democratic mediocrity than a smart, hard-working Republican. I don't like it, but there it is.
Posted by John at 11:56 AM