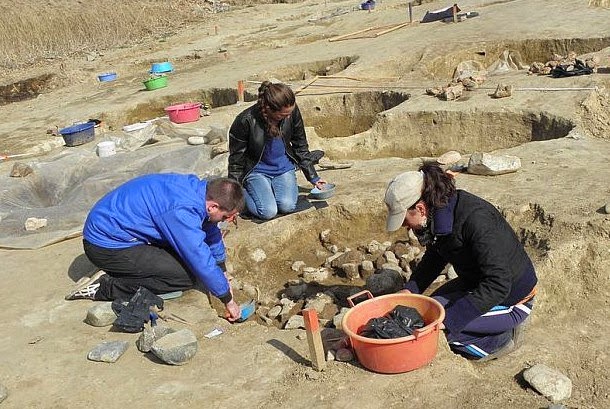 Bulgarian archaeologists carrying out rescue excavations at the site of a Neolithic village called Mursalevo got a surprise. Besides the Neolithic remains, they found more than 20 pits that were dug and filled by Thracian peoples of classical times, in the sixth century BCE:


About 20 such ritual pits in which the Ancient Thracians placed artifacts or food as sacrifice to their gods, or sacrificed animals or humans, have been found on top of the Early Neolithic city near Mursalevo. In the fall of 2014, the archaeologists discovered that one of the pits contains the complete skeleton of a sacrificed calf, with its head pointed down so that it could bleed out, and a knife blade left next to it.

Among the pits full of animal bones and other sacrificed objects, the archaeologists found one that contained human bones:


“We are currently researching a sacrifice pit from the Late Iron Age, the 1st millennium BC, in which we have found the remains of two young persons who were most likely sacrificed in a ritual by the Thracians,” explains Assoc. Prof. Krum Bachvarov from the National Institute and Museum of Archaeology of the Bulgarian Academy of Sciences. The archaeologists excavating the prehistoric site at Mursalevo have started cleaning up the two crushed skulls of the sacrificed Thracian children that they have discovered. So far they have also uncovered a shoulder bone belonging to one of the children.

The reason this burial is interpreted as a human sacrifice is that the children's bodies were treated in just the same way as the sacrificed animals, buried in the same sort of pit with the same sort of objects. For classical Thracians this seems to have been a regular place of sacrifice, and it would indeed be quite strange to bury children who had not been sacrificed in such a place.
Posted by John at 7:57 AM