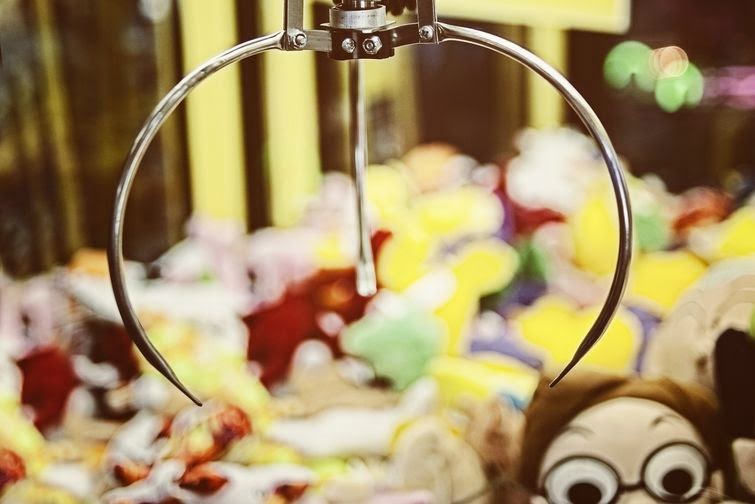 Phil Edwards of Vox explains that your inability to lift a cool toy with a claw machine isn't your fault:


At some point or another you've probably played one of these claw machines, hoping to score the plush toy of your dreams. But despite your skill at perfectly positioning the claw over the prize and activating it, you've found that the pincers just don't grab tightly enough to pick up a stuffed animal.

It's not your imagination. Those claw machines are rigged. But they're rigged in a surprisingly clever way — and not the way most people suspect.

Some people think the claw machine is so hard to win because the stuffed animals are packed so tightly together. But the bigger reason is more insidious than that: the claw machine is programmed to have a strong grip only part of the time. The machine's owner can fine-tune the strength of the claw beforehand so that it only has a strong grip a fraction of the time that people play.

The owner can manually adjust the "dropping skill," as well. That means that on a given number of tries, the claw will drop a prize that it's grabbed before it delivers it to you.

The machines also allow the owner to select a desired level of profit and then automatically adjust the claw strength to make sure that players are only winning a limited number of times.

Vox has pages from the manuals for the machines that explain how to adjust these settings. What a disgraceful scam.
Posted by John at 11:59 AM

So... how is this legal? Does it exploit some loophole about how it's "for entertainment purposes only" or some other nonsense like that?

Could you imagine if arcade machines worked like this? With the game being literally unwinnable a certain amount of the time? And what about gambling? Don't casinoes have to state the odds of winning for their various games?