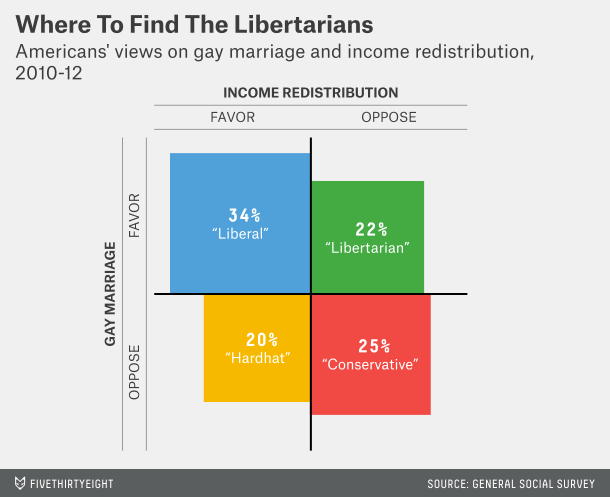 If you ask Americans to describe their politics, most say they are either conservative or liberal, and more say conservative than liberal. As 538 explains, few admit to mixing positions:

But if you ask them about particular issues, you get a very different picture. Many more Americans hold liberal positions about things like Social Security and Medicare than admit to being liberal, and many more hold mixed views. The number of people who hold what this chart calls Libertarian views is more than twice the number who identify as Libertarian.

This confusion bedevils American politics. It makes things especially difficult for a Republican Party that needs the votes of self-identified conservatives who really love big government. That's why we keep seeing plans that convert Medicare to a private program eventually while keeping it just the way it is for people already retired, and other attempts to somehow finesse this conundrum.

The confusion also creates opportunities for people like Lyndon Johnson, who built his whole Congressional and Senatorial career around coming across as a Texas conservative while often voting as a New Deal liberal.
Posted by John at 7:24 AM