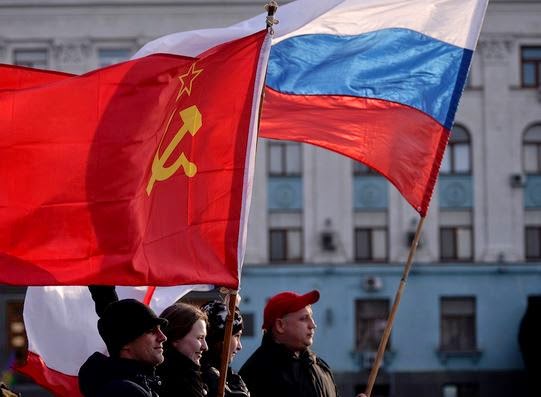 
In the Donetsk region of eastern Ukraine, the Supreme Soviet, as its separatist legislature is known, is nationalizing coal mines and reviving collective farms. At parades, people wave hammer-and-sickle flags; school officials talk of revising the curriculum to celebrate the triumphs of the Soviet Union.

This sort of thing has happened before, in other contentious corners of the former Soviet Union like Abkhazia and South Ossetia in the Caucasus. One of the oddities of these movements is that while extolling the Soviet state they also promote the Orthodox church -- "We're for every sort of authority, not matter how contradictory!"

I think communist nostalgia springs from two roots: one is national humiliation, and the other is that the sad fact that the New World Order just isn't working very well for millions of people, including many factory workers in the former Soviet Union.
Posted by John at 6:17 PM

The funny thing, Communist nostalgia isn't even restricted to the former Soviets. "God I miss the Cold War" was a genuine a cliché in the West even as early as the mid nineties. When your culture spends nearly 50 years in direct social and military opposition to another with a differing idealogy, the loss of the rivalry status quo ends up making many people long for the way things were previously because they feel lost or out of place in the new system.

And yet, the historical precedent for this exact phenomenon is visible throughout time. The Romans built an empire, then crumbled, and those left in the wake of the collapse clung desperately to the ideal of the Empire, and hoped for a restoration - a return to the old ways. The French grappled with this issue in both directions, with Royalists clamboring for a return to the pre-revolutionary monarchy when they were out of power, and Bonapartists clamboring for their own restoration of Napoleon as military dictator once power had returned to the king and "The Ogre of Corsica" was exiled to Elba. In the modern age, groups like ISIS long for a "restoration" of what they believe the world was like at the height of the Muslim caliphates. And even people we would consider level headed, reasonable US citizens clambor for imagined "better" recent pasts, on both sides of the fence - whether you're a conservative who longs for the Reagan Era, or a liberal who longs for the Clinton era.

In reality, the glorified time periods that we become nostalgic over were never as great as we convince ourselves they were. And yet for whatever reason, we all seem to fall into the same trap of romanticizing the past, believing that those things which came before are "better", while those things which are new are "bad" or "corrupt". We celebrate ancient values simply for being ancient, regardless of whether they were actually any good. We fear change and the unknown or unfamiliar. We're stubborn, and we cling to what we know about the past, rather than learn about the present and the future.